Over the course of time, it’s not always easy to predict what will last and what won’t. We, as a culture, and a civilized race, believe we have come very adept at being able to tell what has longevity, or at least the potential of longevity. Across all of life, things have surprised us however. Who knew Keeping Up With The Kardashians would be a year after year success? The Twinkie! The Twinkie has been around since 1930, even in an age of Keto diets and the war on sugar, it’s still living large. Even the traditional gas powered internal combustion engine has been around since before Abe Lincoln was president. And then think of all the automobiles that have been powered by those very same gas engines — of course cars like the Corvette, Mustang, and Porsche 911 had staying power, that much seemed evident to just about anyone almost instantly. But then, a car like the one Mazda introduced in 1989 called the Miata, well, we have to admit, we didn’t think it would be around thirty years later.

Yet, new for 2019, the MX-5 Miata (Mazda has gone back and forth with the names over the years, but ultimately has coined both as the car’s name, so you can take your pick). There isn’t a ton of things new for 2019, but what Mazda did decide to change, was all for the better. The aggressive front and rear fascias remain, making what used to be a car that got some owner’s man-cards called into question much less of an occurrence. The very trick and long overdue RF Targa option also remains in what is the ultimate compromise for the top-up-or-top-down indecisions that plagued so many MX-5 owners.

In what may seem like a small addition, the now tilting and telescoping steering wheel is actually a huge (and another long overdue) option that greatly benefits just about everyone driving the car. The big news is that that Mazda pumped some serious power into the 2019 version — no, no supercharger or turbo … yet. Something about the purity of the naturally-aspirated engine driving experience, blah blah blah. But, they did churn that 2.0-liter inline-4 cylinder engine up a few ticks, twenty six of them to be exact. Now, 26 horsepower may not sound like a huge difference to a lot of street racers, but in a car that tips the scales at a bantam weight of only 2,339 pounds, twenty six additional ponies under the hood can be felt real fast. That additional power brings the peak up to 181 horsepower at 7,000 rpm along with a slightly improved 151 lb-ft of torque at 4,000 rpm. That power is sent directly to the rear wheels via any choice of transmission you want, so long as what you want is a traditional six-speed manual. Mazda is serious about this purist thing.

Three trims are available: Club, Sport and Grand Touring, with the GT being the top of the line, which includes niceties like larger 17-inch wheels (versus 16s), automatic climate control, a nice navigation system and even rain-sensing wipers. Add in the definitely-worth-the-money $550 GTS package and you’ll also be treated to driving perks like a limited-slip differential, Bilstein dampers, and a very useful strut tower brace.

Out on the road, the MX-5 performs exactly how you want a pure sports car to perform. Winding out each gear to its higher 7,500 rpm redline with the wind in your hair as you carve up some newfound mountain ravine is where this car was born to run. And although we love the idea of forced induction, the 2.0-liter NA motor has plenty of oomph and doesn’t demand center stage to your attention, but instead serves happily in a supporting role to the drive itself. The car is as perfectly balanced as anything else out there — its linear power deliver, predictable cornering, and very basic drivetrain all work in perfect harmony to highlight the pure enjoyment of spirited driving.

Another nice thin about having a smallish motor that doesn’t need race gas to run is that not only is this car incredibly sporting, it is also unconscionably efficient. How does 26/34/29 city/highway/combined mpg sound? Pretty good for a car that wasn’t designed as a daily commuter. As if all that wasn’t enough, thanks to its relatively simplistic setup, the MX-5 has a base price of only $31,675. There isn’t technically a fun to dollar ratio that is quantifiable in the literal sense, but we would through our rough estimation that you’d be hard pressed to find another car that is this much fun, for this little amount of money. The MX-5 is an incredibly enjoyable car that is easy on gas, cheap to buy, simple to drive, and provides a sense of freedom that only few things can in this world … maybe we aren’t so surprised this car has lasted so long after all, it’s more fun than watching a Kardashian eating a box of Twinkies! 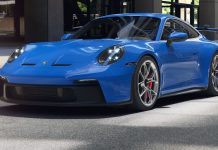