Genesis G90 – What’s in a name? Shakespeare reminded us so simply that a rose by any other name would smell as sweet. And while that concept may have warped botanist’s minds and sent many of them into a philosophical recalibration of their life’s calling, we may have found an answer to fire back with an Othello-like retaliation. In the automotive world, all cars are not created equal. Even the ones that are created equal, aren’t always equal. How can that be? Simple. The problem … is image. You see, as the bottom line of a car goes up, the quality of that car only goes so far, and then the rest of that pumped up price sits on idea the car is worth more just because of the badge it wears, even if everything else about it is the same as another car. But all that may just about to be turned upside down. Enter, the Hyundai Genesis G90.

The upscale Hyundai is becoming less and less of an oxymoron in recent years. Gone are the days of dime store plastic panels that Fisher Price wouldn’t use, and the ever-popular automatic seatbelt track along the inside of the door frame that would inadvertently bash you in the head if you weren’t paying attention. No, the Genesis G90 is the flagship for a new kind of Hyundai. It is luxury, without all the fluff. Unlike the current trend of the big-name luxury cars, Hyundai hasn’t subscribed to the arms race of digital nonsense, where companies seem to think that adding more and more complex systems combined with more controls knobs and more menus than a Waffle House. Sure, you can customize your settings, but the Genesis G90 is set up from the get-go, so you can get and … just go.

Hyundai has done it right with the .Genesis G90. Starting with its direct-injected 3.3-liter twin-turbo V6, there is plenty of power on tap. 365 horsepower at 6000 rpm plus 376 lb-ft of torque starting at a crazy-low 1300 rpm. So even with nearly 5,000 pounds of heft to moved, the car never feels like it is at a loss for power. If you wanted to get serious, then opting for the 5.0-liter V8 will get you to that board meeting even quicker. In what sounds like another 5.0 motor we know, the G90 puts down a solid 420-horsepower and 383 lb-ft of torque.

Whichever engine you choose (opt for the V8!), you will get the same wonderfully competent 8-speed automatic transmission to channel all that power to the wheels. This in-house designed slush box shifts seamlessly and is never caught hunting for a gear. Power gets routed to the rear wheels by default, but there is an optional H-Trac all-wheel drive system that keeps a rear-wheel bias. 0-60 for the V8 comes up in a flash at only 5.2 seconds, while the V6 is only a couple ticks behind. Not bad for a high-class cruiser.

That powertrain is supported by a suspension that Hyundai clearly put some real R&D into. The drive is dream-like. The G90 generates just enough connection to the road to remind you that you are the driver but keeps enough distance between you and the road so as not to bother you with any minor imperfections it may encounter along the way. Hyundai claims that the steel structure of the G90 is both lighter and stiffer than the Mercedes S-class. From the feel of it, that claim is probably pretty accurate.

Inside the cabin the Genesis G90 has everything you could possibly want in a posh luxury car. Mood lighting, sound suppression, power sunroof, four heated and ventilated seats, a 22-way (seriously?) adjustable driver’s seat, real wood trim, real stainless-steel trim, a wireless charging pad, a 17-speaker audio system, nine airbags, and of course, power soft-close doors because no one with money should ever be forced to close their own door, it’s simply unbecoming.

With a starting price of $69,000, the Genesis G90 is a relative steal. Nowhere else can you get so much for so little. But there is one pesky problem, The G90 wears a Hyundai badge. And while the Korean company has done wonders to climb the social ladder and get access to big spenders, the question is going to be whether or not this car, despite all of its amenities and character, can compete with the old money Bimmer and Benz crowd. Can a die-hard German legacy owner really turn his or her back on their family, forsake their image, and fall in love with a car like the G90, that is everything they’ve been told to hate? It’s a storyline we may have seen before. 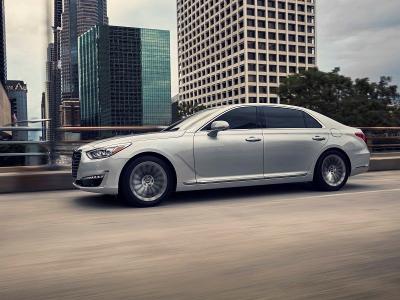 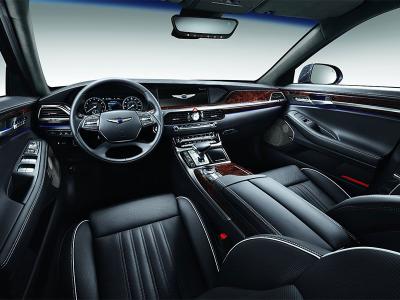 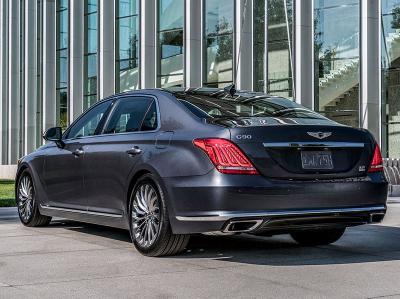