2020 Ram Promaster — In an up market, everyone wins. People spend money, they go on vacations, they take chances, and occasionally they finish long-shelved projects that were sidelined due to financial issues in years past. Most of those projects focus on home ownership — it’s a booming business, and there is a lot of money to be made for everyone involved. But throughout all the appreciation/value talk, we shouldn’t lose sight of the unsung heroes driving most of that extra money your house is now worth — the contractors. Well, the good ones anyway, are people too. And they have long been ignored by the trucking industry as needing anything more than a box on wheels to carry around all of their various tools of their particular trade.

But, all that may finally come to an end thanks to the 2019 Ram Promaster. It may look like just another cargo van, but Ram has made it customizable to suit just about any profession. For starters there are 12 different model configurations you can choose from for your new ride. The most foundational choice you’ll need to make is whether or not you want the standard roof or the high roof cargo/window van. The latter being outfitted with actual (and aforementioned) windows, for those of you that don’t want to look like a modern day Buffalo Bill.

Beyond that Ram offers packages to suit its biggest customer bases. There is a Plumbing Package, and an HVAC Package, the difference being in the interior setup of the cargo area, which is tailored for the profession-specific tools and spacing required by each job type. There is also a customizable graphic design feature you can add to your Promaster via a PDF upload to their website, which can be translated onto the side of your van (for a fee of course).

The Promaster itself is built to work, but unlike some basic Home Depot rental truck, this Ram has features you might not expect, but certainly deserve. The two front seats are able to swing around 180 degrees to face the rear of the truck. The center stack is more than just an AM/FM radio, and has available Connect 3 NAV which features a 5-inch touchscreen, navigation, integrated voice command, hands-free calling, and Bluetooth.
The Promaster even sports some fun safety features like a standard, and long overdue, backup camera. Now you can finally see what’s behind you instead of just hoping you don’t accidentally commit a felony while trying to move your brother’s couch. There is also rear park assist, as well as electronic stability control, front air bags and standard ABS.

The front end of the Ram is even made to save you some money. The front fascia is actually a three piece setup that is made from thermoplastic composite panels that are removable to make servicing your service truck that much easier, and even the headlights and taillights were placed out of the typical crash spots to save you a little extra in the event of a fender bender.

Inside that front end and under the hood is the one place where Ram actually doesn’t give you any choice. Well, you can have any engine you want, so long as what you want is a tried-and-true Chrysler Pentastar 3.6-liter V6 that makes the same 280-horsepower and 260 lb-ft of torque as it did for the last seemingly thousand years. Power gets routed through a 62TE six-speed automatic transmission and funneled, surprisingly, to the front wheels. But that move was by design, as Ram decided that FWD would be better in various weather conditions as opposed to the old rear-wheel set up. Ram set up the Promaster to be able to go up to 10,000 miles between oil changes, which adds up considerably over the lifetime of the truck.

Inside the Promaster has up to 460 cubic feet of space depending on setup — which is enough to move a small apartment’s worth of stuff in one trip. It also has a 4,680 maximum payload capacity as well as a towing capacity of 5,100 pounds. The best part of this work truck is that you don’t actually have to work all that hard to be able to afford one. Base price chimes in at a very reasonable $30,245.

All in all, the Ram Promaster is a wonderful truck to finally allow the unsung heroes of the housing world to be able to go from job to job in comfort and relative style. And maybe after paying so little for their new truck, they can give us a bit more of a break on that new basement renovation we’d like to finally finish up. 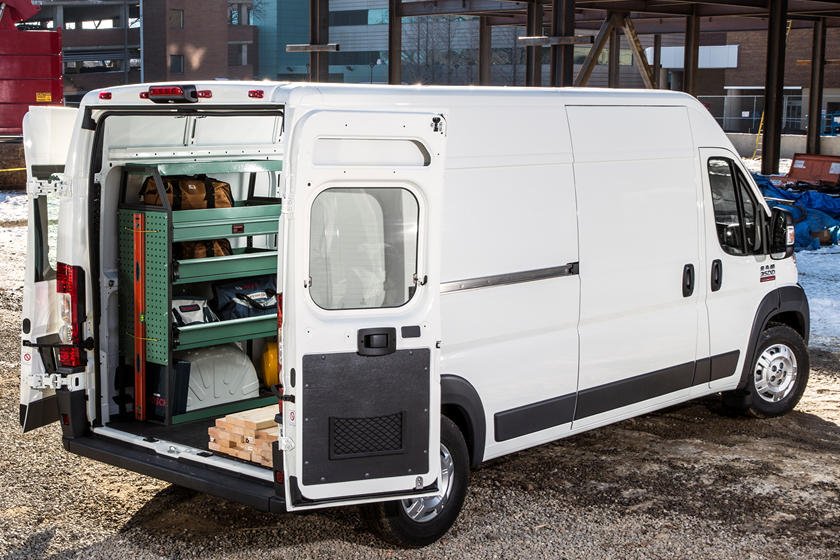