Hyundai Santa Cruz — In the annals of automotive history, there are a handful of cars and trucks that stand out for one reason or another more than others. Sometimes, the reason they stand out is because we’ve had trouble deciding if in fact, these unique creations are supposed to be classified as cars or trucks. Cars … er, trucks, or whatever, like the Ford Ranchero and Chevy El Camino back in the ’50’s and 60’s started this whacky trend, but quickly acquired a cultish following for any number of reasons. Maybe because these vehicles were extremely versatile and offered up a myriad of uses in all sorts of situations. Or perhaps, these mavericks were so quirky that some owners just fell in love with something different. More recently we’ve seen the Subaru Baja take up the mantle of the unorthodox, and while it only had a model run of about four years, we’re inclined to think that this model will become something of a collectible in the not-too-distant future.

The latest and greatest rendition of this “what-exactly-is-that” number comes to us from Hyundai, in the form of the 2022 Hyundai Santa Cruz. In Hyundai’s continued trend of naming their models after south western US cities, somehow the Santa Cruz seems to fit its name nicely – cool and a little off the beaten path. For the Hyundai classifies the SC as a pickup truck, and if we had to describe its looks, we would say it was the lovechild of the aforementioned Subaru Baja and the first generation Honda Ridgeline. The rear view could easily be the grandson of the Baja, minus the giant “Santa Cruz” plastered on the tailgate. A strong profile and sleek but sturdy stance projects the Santa Cruz with a sense of confidence, as if to say “yep, this is me like it or not”.

Power comes from either a base 2.5-liter inline-4 engine that produces a moderate 191-horsepower and 181 pound-feet of torque, is backed by an eight-speed automatic transmission. As an optional, and preferable upgrade, Hyundai offers up a much more fun 2.5-liter turbocharged inline-4 that produces 281-horsepower and 311 pound-feet of torque. That power combined with a quick-shifting eight-speed dual-clutch automatic. With a curb weight of just around 4,000 pounds, the Santa Cruz has got some serious giddy-up. 0-60 mph should take a scant 6.2 seconds on its way to a quarter mile time of an impressive 14.6 seconds at 98.5 mph.

Where the Hyundai Santa Cruz takes after its spirit animal Ridgeline is that it also uses an independent rear suspension as opposed to the old-school rear-leaf spring setup of yesteryear. Not only does the independent setup substantially improve ride quality, it also helps with braking – 60 – 0 mph in just 117 feet, as well as handling which chimes in at 0.85 g around the skidpad. That efficient drivetrain also manages to get a praise worthy 21/28/24 city/highway/combined mpg.

Much like the Ridgeline, the Santa Cruz’ bed may seem questionable at first in terms of usable space, but Hyundai wasn’t stupid with their design. With the tailgate down, you can fit a full 4×8 sheet of plywood or dry wall. There’s also an in-bed lockable trunk space to keep valuables, or to isolate those muddy boots, or even keep ice and drinks for tailgate. The SC also shows off its truck-ishness by being able to tow a sizable 5,000 pounds and lug around up to 1,753 pounds of payload. Those numbers rival some larger, and more expensive trucks, which is impressive considering the competitiveness of the truck market.

And speaking of price, base price for the Hyundai Santa Cruz should come in at just about 40k. That is not a lot of money for a lot of usable features. The Santa Cruz is comfortable enough to drive long distances, rugged enough to make weekend trips to Home Depot, and good looking enough to have people wonder just what it is. And for the record, this is again, a truck. But the SC does continue a long lineage of unorthodox vehicles that while at first, may seem polarizing, have something about them that we just can’t help but love. 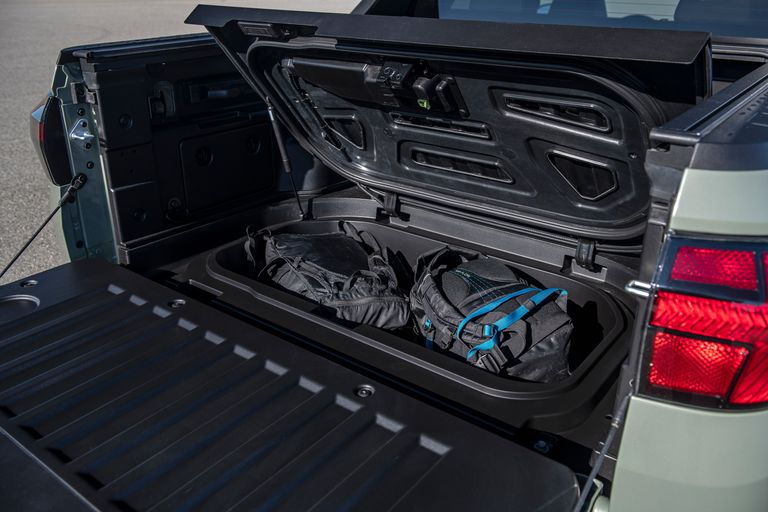 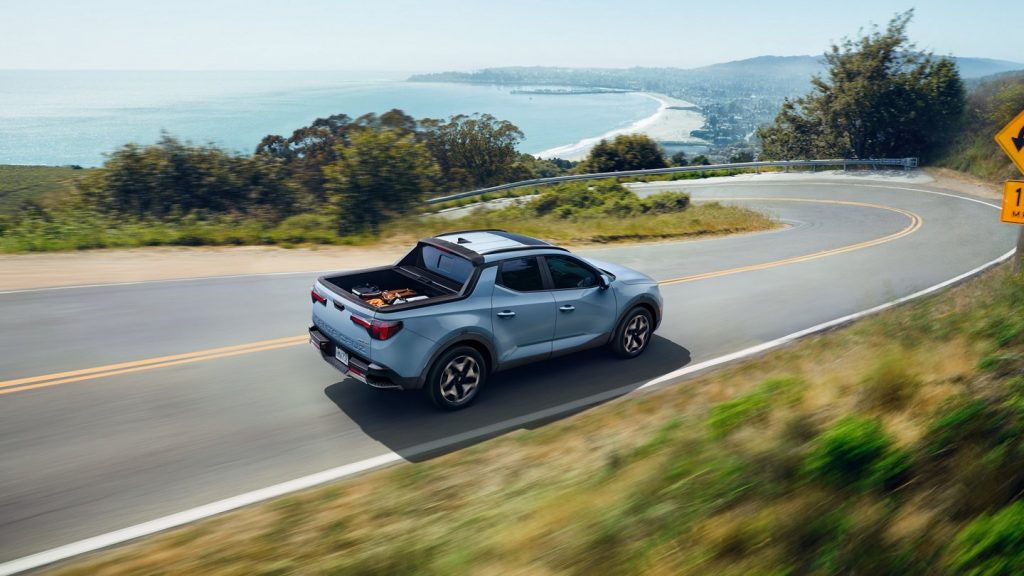