It’s only a matter of time before we start to see entire fleets of electric cars from what were once titans of the gas-powered industry. Sure, Tesla and the newly formed Rivian are planting their flags as electric from the start, but it’s almost more fun to see how some of the more traditional car companies decide to change their ways. We’ve seen companies like Ford and Chevy start to give up glimpses into that new world, but now, we are finally getting to see what Mazda has in store for the future in the form of the 2022 Mazda MX-30.

The Mazda MX-30, at first glance reminds us of the Mustang Mach-E in a lot of ways. The MX- preface harkens back to Mazda’s pride and joy, the MX-5 Miata and subtly tries to imbue us with a little sublime excitement much like Ford tried with the Mach-E. The Mazda MX-30 is a bit small than the Mustang but it does look the part of a sporty crossover, but in truth we’re not entirely sure who these sorts of cars are built for. They’re too small to be considered utilitarian, and not nimble enough to be considered true sports cars. Perhaps it’s for those that want a competent car with slightly higher ground clearance than your average Mazda3 sedan.

And while it may look the part, the sporty power is definitely lacking. Using a 35.5-kWh battery only offers about 100 miles of combined range. Mazda tells us that using a 50-kW Level 3 fast charger, the MX-30’s battery can jump 20 to 80 percent in a little more than a half an hour. That battery also doesn’t supply much in the way of power either. Making just 143-horsepower and 200 pound-feet of torque to move the 3,663 pounds of heft seem a bit overwhelming for the small motor. That power is routed through a 1-speed automatic and then on to the front wheels.

The MX-30’s door arrangement is noteworthy. There are no pillars to get in the way of climbing into the back seat through the suicide-style rear doors, while the front doors can open to a full 90 degrees, giving plenty of open space to fit anything from a coffee table to a suitcase as long as it will fit within the confines of the relatively diminutive real estate inside. The dashboard and cockpit are driver-centric, keeping with Mazda’s driver-focused attitude. The MX-30 takes the environmentally friendly idea a bit beyond just using electric and also employs thinks like cork, recycled threads as well as other sustainable materials to build its very ergonomic and pleasing interior. If some of you find yourselves wondering what the pillar-less suicide doors remind you of, we’ll save you the Google search and tell you that they were inspired by the gone-but-not-forgotten rotary powered RX-8.

With a base price of $34,695, we will hope that there are tax credits that can be used when purchasing this car. All in all, the Mazda MX-30 seems okay for a stepping stone into the world of all-electric, but there is definitely considerable room for improvement, starting with a bigger and more powerful battery to not only elicit some of that fabled ‘driving excitement’ Mazda has always tried to instill in us, but also to allay the fears of those wary about batteries dying out and being stranded in the middle of nowhere with no way to get home. But again, this is Mazda’s first foray into the electric world, so we give them credit for trying, and see the potential in the MX-30, but we are already looking forward to the next, and improved, generation of this car. 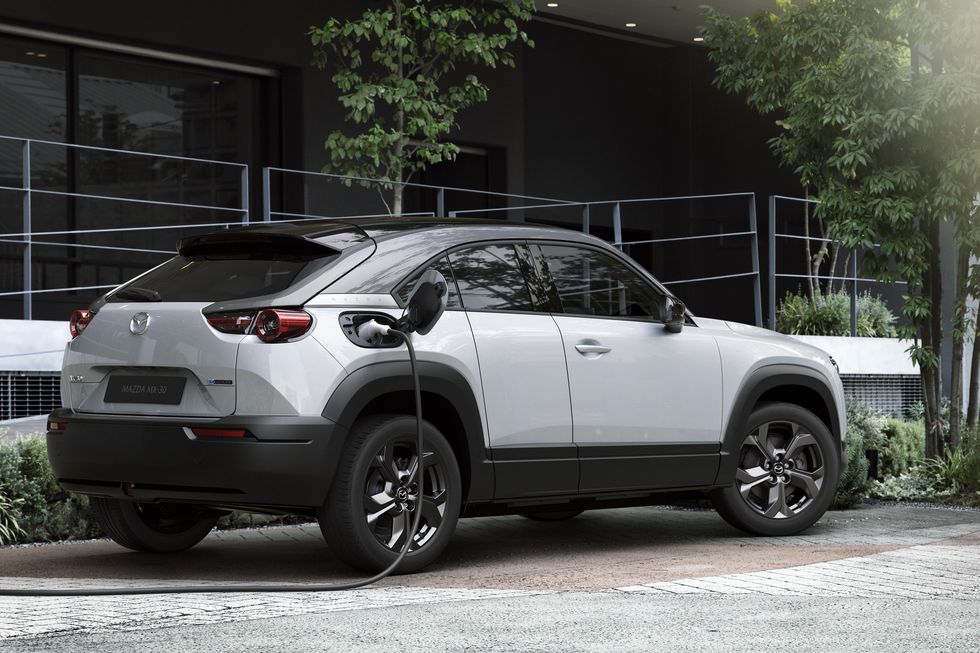