No one really likes monopolies. For every Apple there needs to be an Android, for every Coke there needs to be a Pepsi, and for every McDonald’s there needs to be a Burger King or Wendy’s. In terms of the car world, Ford and Chevy have been at odds for decades, but that hasn’t stopped Ford from taking aim squarely at what might be the biggest vehicular monopoly of the last half century — the Jeep Wrangler. Jeep has stood on a platform essentially by itself when it comes to the “fun and competent” SUV status. But Ford is aiming to change all that, and although we reported what we knew about the Bronco last year, now we have a lot more clarity on what exactly Ford’s plan of attack is, and leading that charge is the 2021 Ford Bronco First Edition.

Designed to be something of a collector’s item, Ford started a waiting list for orders last year to build anticipation … and boy did it work. All 3,500 examples were spoken faster than a low speed police chase down the 405 took in 1994 (too soon?). So Ford, seeing the opportunity to make more money has decided to double production on the First Edition. Why is this SUV in such great demand? Let’s find out …

Taking many design cues from its Wrangler rival, the 2021 Ford Bronco First Edition will be available in both two and four door models, have rugged styling but also equally rugged off-road capabilities. The body itself is modular so panels are easy to remove for repair, or personal modification (another Jeep trait). The roof is removable on both two- and four-door models, and can be had in black or your choice of a dazzling array of fun colors to match the body.

Power comes from a potent, and more powerful (than the Jeep’s) turbocharged 2.7-liter V6 that produces an impressive 310-horsepower and equally impressive 400 lb-ft of torque. That power gets routed through a capable and fuel-efficient 10-speed automatic transmission. But, the biggest news here is that for the first time in a long time, Ford will be offering a manual transmission on something other than the Mustang, and that is going to be a game changer. Jeep has long touted its fun-factor as its main draw for the Wrangler, and that has been highlighted by the driver-involvement of being able to shift gears for yourself. By matching that option, the Bronco could actually be a serious threat to the Wrangler.

Outfitted with a stout 7-speed Getrag MT88 manual, this heavy duty trans can handle up to 406 lb-ft of torque. Now for those paying attention, the 2.7-liter engine makes just about that much torque, so Ford has put a little dampening on this celebration by only allowing the Bronco to be had with a manual if you choose the less powerful (and less torquey) 2.3-liter turbo inline-four that makes 270-horsepower and a more modest 310 lb-ft of torque. But fear not, as the real upper limit is closer to 600-lb ft of torque for certain other applications, so we think Ford is just limiting choices to begin with, and we will eventually see the bigger engine/manual combination in the near future.

The other initial caveat to get the stick shift is that it needs to be had as part of the Sasquatch Package. This is essentially the Ford version of the Rubicon trim. Sasquatch adds giant 35-inch tires with 17-inch Beadlock Capable wheels, both front and rear locking differentials, a shorter 4.7 final drive ratio to help low speed crawls, as well as better ground clearance.

Price wise, there is good news and bad news. The bad news is that if you do want to sign up for one of these very 2021 Ford Bronco First Edition models, time is running out fast, and it’s going to cost you a base price of of $60,800 for the two-door or $64,995 for the four-door. The good news is however, if you can deal with not having one of the more collectable trims, a base Bronco will run you almost exactly half those costs respectively. The even good-er news is that finally it looks like we will not longer see a monopoly in the fun/competent SUV category, and the Wrangler has been put on notice. There’s a new player in town, and that’s good for us consumers. When companies need to get off their laurels and directly compete with each other, it makes them better, and we all win. 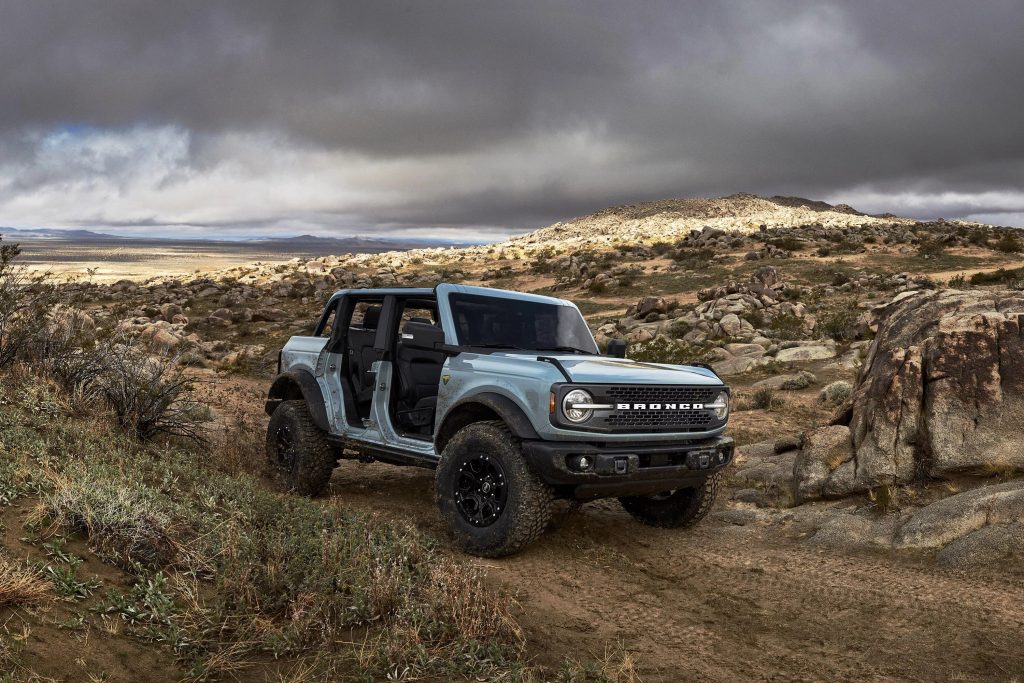