2021 Hyundai Veloster N — If you had asked this doubting author back in 2019 if Hyundai’s new Veloster N model was going to make it, you probably would’ve been met with some kind of snarky response about what that ’N’ might stand for. Perhaps, “No way!” or “Not a chance” or maybe “Never Going to Last!”. We then would have probably cited the fact that the very exciting Genesis Coupe had bowed out in 2016 after only seven model years and that it could be argued the Genesis was a better-looking car. But here we are two years later and the Veloster N is getting its first major makeover.

The big news is that the Veloster N is getting a new DCT 8-speed automatic transmission to join its already exciting six-speed manual. The dual-clutch slush box is significantly quicker than even the most experienced manual shifter-shifter. In previous iterations, the N could be optioned with a Performance Pack that bumped power output to even higher levels. For 2021, that package is standard issue, making this hot hatch even hotter.

Power comes from a retuned 2.0-liter DOHC turbocharged inline-4 that produces an awesome 275-horsepower and equally impressive 260 lb-ft of torque. That power is then routed through either of the aforementioned transmissions and finally onto the front wheels before it hits the tarmac. If you decide to opt for the DCT you also get maybe the most fun button ever installed on a car — Hyundai calls it the NGS button, which stands for “N Grin Shift”. Much like the nitrous button on Nick Cage’s famous Eleanor in Gone in 60 Seconds that had “Go Baby Go” inscribed on it, the NGS button is almost as much fun. It temporarily boosts torque output to 278 lb-ft of torque for 20 seconds. And just in case you were wondering, you need to give the NGS button two minutes between uses to recharge its capabilities.

That DCT does add about a hundred pounds to the curb weight, checking in at 3,166 pounds. Of course, as with most front engine-front drive hatchbacks, that weight isn’t very evenly distributed. With a weight distribution of 65/35% front/rear, you might expect the handling on this car to be a little squirrelly, but it clocks a crazy impressive 0.97g around the skidpad. That figure is also due in no small part to the limited-slip differential and electronically adjustable dampers. There are also bigger brakes for the 2021 model that cools faster and help slow the N down from 60-0 mph in just 114 feet (111 feet for the lighter manual).

So what’ll she do? That’s the big question that any hot rodder really wants to know, and we are here to tell you, the Veloster N hauls. It blows its predecessor out of the water by nearly a full second from 0-60 mph, taking a scaldingly fast 5.1 seconds, and running through the quarter-mile in just 13.7 seconds at 102.9 mph. But if that’s not enough, thanks to the diminutive size of that mighty mouse motor, the Veloster N still manages to post a 20/27/22 city/highway/combined mpg.

Of course, all this newfound power and excitement comes at a cost. The base price for this pocket-rocket comes in at a still-reasonable $33,255, and with nothing more than the DCT to add as far as options go, you won’t be paying more than $35,000 for a decked out N.

So while we would’ve thought that the ’N’ in N-Line stood for “No Way” or “Never Going to Last”, it seems that we should amend that ideology and wonder if maybe it should stand for “Nasty” or “Nightmare” for everything else that considers itself a hot hatch. 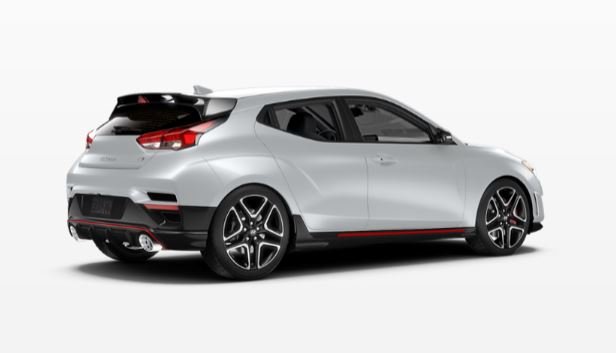