The new Dodge Charger SRT Hellcat Redeye is a widebody beast with a 797-hp monster under the hood making it a 203-mph four-door sedan from hell.

Sometimes too much is never enough. At least that seems to be the philosophy of the SRT engineering team at Dodge. By now you’re probably aware of the Hellcat, whether it’s in Challenger or Charger form. The 707-horsepower power peak was mind bending to think about at the time — a factory production car that cracked the 700 mark and actually came with a warranty?! Bananas! But as with most things in life, we adapt to the new normal, and suddenly we were accustomed to seeing these low-profile supercars ripping down the interstate. So Dodge engineers must have decided that they were bored with their hot rods and that it was time to step up what many thought was the highest peak of production car power. Enter the 2021 Charger Hellcat Redeye.

We can only speculate that SRT chose “Redeye” as their top-tier Hellcat moniker because when you mash the throttle on nearly 800-horsepower, there is a distinct possibility your eyes might just start bleeding. Or perhaps it’s because this car is so fast, it will remind you of traveling through the atmosphere in a jet. Either way, a rose by any other name would smell as sweet and a car this powerful by any other name still hauls ass. So how does SRT squeeze another nearly hundred horsepower out of an already monster motor? Well, using old-school hot rodding tricks — the Redeye uses a 2.7-liter twin-screw supercharger that produces 14.5 psi of boost, which is 0.3-liters and 3.1 psi more boost than your garden variety Hellcat. Redline for the Redeye gets raised an additional 300 rpm to 6500 rpm.

To keep that massive power from self-destructing, Dodge opted smartly to upgrade to dual fuel pumps, and use even stouter internals – connecting rods, pistons and valve train. The reinforcements didn’t just stop at the engine either, as Dodge tells us that they also increased the strength of the axles by twenty percent as well as the driveshaft by an additional fifteen percent.

The specs and acceleration times are as expected … silly. The aforementioned 6.2-liter super-duper charged pushrod V8 makes a ridiculous 797-horsepower and 707 lb-ft of torque. Though we would love to see a manual gearbox on this thing, Dodge only offers an 8-speed automatic, which then routes power to the rear wheels only. There was thought of trying to use the AWD system from the TrackHawk, but the suspension geometry just wouldn’t work with the stance the Charger needs to look the part of muscle car. Speaking of looks, SRT has decreed that now all Hellcats will be given the much improved wide body design that dramatically improves the sportiness and look of this car, as well as helping to distinguish it a big more from its much less powerful siblings.

For once, having a sports car that weighs in at 4,654 pounds is actually a good thing as all that heft helps keep this car and its massive Pirelli P Zero PZ4 305/35R-20 rubber in contact with the asphalt at all times. Sure, you can still chirp the tires into about fourth gear, but all we said is that the weight … helps.

In terms of drag races, the Hellcat Redeye was born to be the apocalypse and ender of dreams for anything with a Bowtie or Blue Oval badge. 0-60 mph takes just 3.5 tire-shredding seconds, while 0-100 mph takes only 7.5 seconds, through the quarter mile in just 11.5 seconds at 126 mph and on to a manufacturer’s claimed top speed of 203 mph, which we have no reason to doubt. Braking from 70-0 mph takes just 155 feet thanks to massive 15.7-inch front and 13.8-inch rear vented rotors. And despite its somewhat portly curb weight, the Redeye still manages an impressive 0.93 g around the skidpad.

In terms of fuel economy the Redeye basically returns as expected, which is to say that it’s not great. Posting a 12/21/15 city/highway/combined mpg isn’t great, but if you consider that in the not-too-distant past, having an 800-horsepower car usually meant averaging about 2-3 mpg because it was purely an NHRA race car.  If you’re buying a Hellcat of any kind and worried about fuel mileage, maybe you should rethink your priorities in life. Oh and with all that power, let’s not forget you can take four of your best friends along for the ride of their lives and all for a base price of just $82,190.

The Hellcat Redeye is honestly insane. It’s too powerful, too fast and too much for just about anyone that doesn’t possess an SCCA license. But like many other things in life, sometimes too much is never enough. 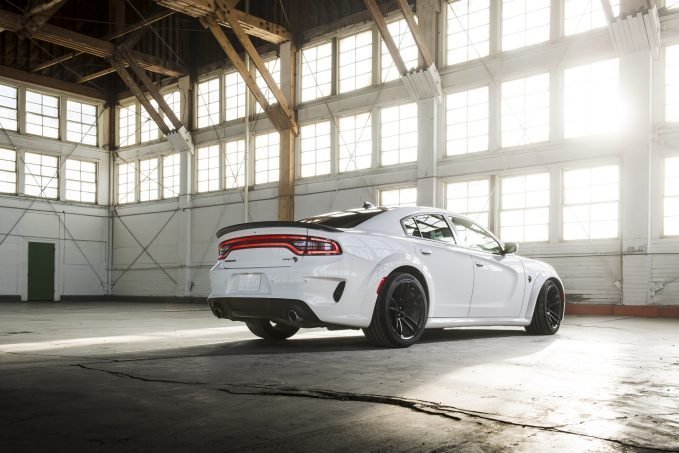