2020 Toyota Tundra TRD — In the world of marketing, name recall is paramount. It’s the reason we hear and see insurance companies names and logos in just about every corner of our civilized world. Radio and TV shows are littered with them every single commercial break, and then as if that’s not enough, they will oftentimes sponsor segments on those shows just for some added air time. And if it seems a bit overkill sometimes, that’s because it is, by design. Companies want to not so subtly brainwash you into logging their name into your short and long term memory so that if and when you actually need insurance, their name is the first thing you think of. The problem is, all of the insurers are doing this, so it just becomes white noise after a while. But insurance companies aren’t the only culprits of the excessive auditory and visual graffiti — the full sized pickup truck segment is just as cut throat as the Geico vs. Progressive wars.

On any given Sunday, watch a local NFL game and you will be inundated with commercials for the Ford F-150, Chevy Silverado and Ram pickup trucks. Over and over, endlessly coming up with the very specific wording and very exact sets of circumstance to tell you how their truck seems to be the best at that one particular thing in that one particular scenario. And for the uninitiated into the world of automotive advertising wars, one would begin to think they really only had three choices to pick from. But, that is just the trap they’d like you to fall into. There are quite a few other options available, they just don’t scream as loud for your attention, but that doesn’t mean that they are any less deserving. One of those just happens to be the 2020 Toyota Tundra TRD.

When it first debuted back in 1999, the Tundra was panned by its opposition in what was something of a cultural bias — the idea was that a Japanese automaker couldn’t possibly build a tough American style pickup truck. Well after a few years that idea was quickly put to rest. Fast forward two decades and the newest TRD is a thing of beauty, ready to take on all comers.

With a price of $50,100, the Tundra TRD isn’t cheap, in fact the base trim comes in about 15 grand lighter. But the TRD offers a host of amenities that make it worthwhile. Push button start with passive entry, leather seats, Apple CarPlay and Android Auto, not to mention a larger touchscreen for the infotainment center (with navigation), mobile hotspot, and bigger more menacing front grill.

As for the actual mechanical upgrades, the Tundra TRD offers a massive 38 gallon fuel tank for extended range, beautiful 18-inch forged BBS wheels, TRD-tuned springs and HD FOX shocks that allow for an extra 1.5 inches of travel for even the most aggressive bata-wannabes. The aluminum skid plate measures a full 1/4 in thick, while the trim specific dual exhaust features black tips and has a very healthy growl to it. The Rigid Industries LED fog light setup offers a 35 degree wide-angle beam that illuminates even the darkest of trails, while the package itself sits in place better than anything you could try and bolt on from the aftermarket.

One of only a few complaints we might have about the new Tundra is its choice of engines. And that’s because there isn’t one. No matter what the trim, you’re getting the same 5.7-liter iForce V8 that produces 381-horsepower and 401 lb-ft of torque. That isn’t an insignificant amount of power, but the one thing we will say about those big three loudmouths from Ford, Chevy, and Ram, is that in their constant pursuit to one-up each other, they do get better. 381-horsepower was amazing a decade ago, but nowadays, that’s just about average. Relatedly, the transmission that engine is mated to is the same six-speed auto that has been there for what feels like an eternity. The others in this same category are up to nearly double the amount of gears in their transmissions, which not only allows for better torque multiplication down low, but also taller top end gears to achieve better fuel economy. We don’t need you to brag about everything that gets better Tundra, but we do need to start seeing improvements. That big V8 does allow for some serious towing power — 10,200 pounds to be exact, but it does come at a price, as this big rig returns a mere 13/17/15 city/highway/combined MPG.

All in all, we like the Tundra TRD. It almost feels like a hidden treasure amidst all of the advertising noise pollution the big three are constantly bombarding us with. And with just a few more improvements, this truck could easily be king of the hill, and what’s nice is that it could do so without screaming and telling us about the entire way up. Now, if only we could think of someone to help us insure it … 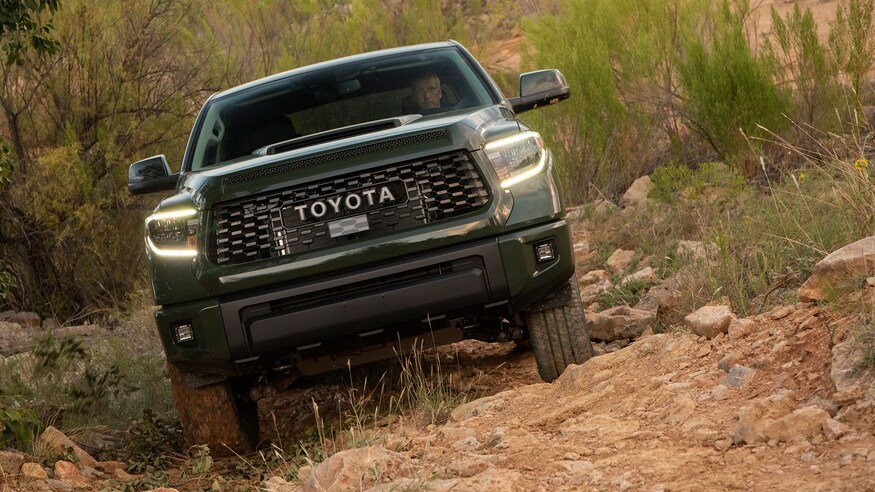 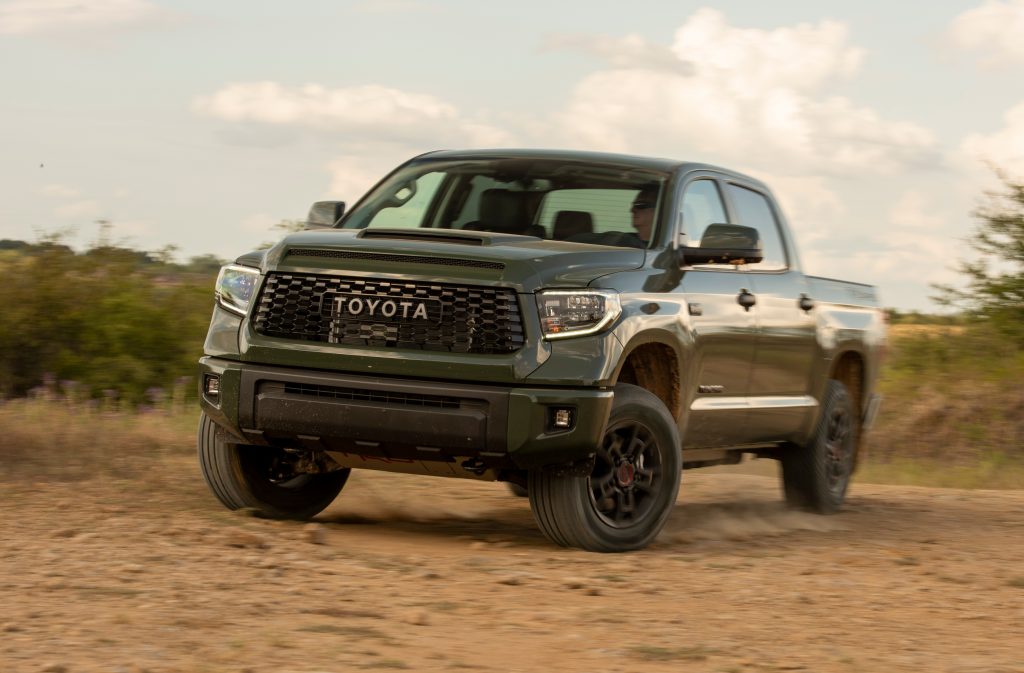 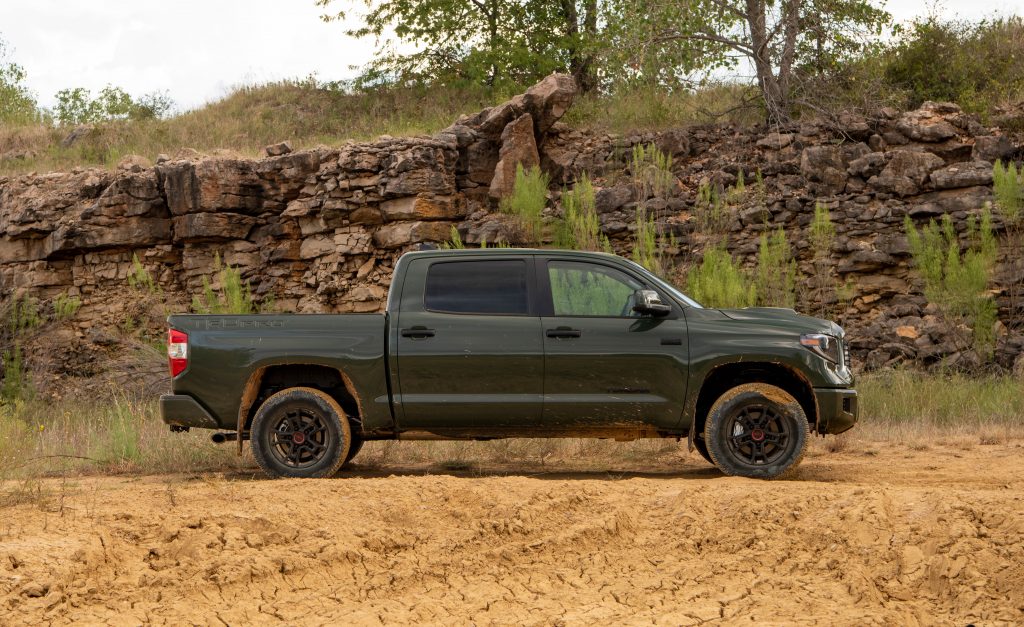 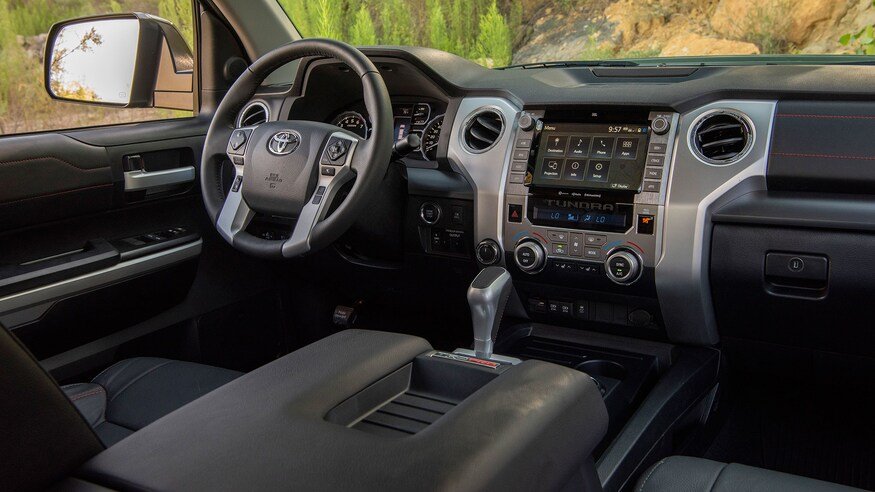 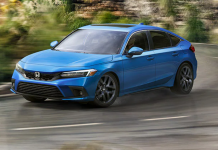 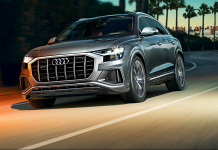