Mercedes-Benz G550 — It’s hard to improve on a successful formula. Just ask Coca Cola how that went in the ’80’s, or how about when Heinz tried changing their ketchup colors to green and purple instead of good ‘ole tomato red? Yeah, no good. In the automotive world, we’ve seen companies try to just hint at the change of some of their models and the public outcry is so fierce that eventually all gets put right with the world. Porsche, for example, has realized for decades that its flagship 911 is inherently flawed due to poor engine placement. But even when they were rumored to change it, Porsche-o-philes lost their minds and revolted. So what did Porsche do? Instead of changing the master recipe for success, they simply created an entirely new model called the Cayman. The Mustang was not so lucky, and got reconfigured as the Mustang II for a couple years back in the ’70’s and thankfully that Pinto-based monstrosity was put out to pasture in favor of the third-gen Fox Body Pony Car that became legendary in the street rod scene.

So with all that knowledge, a company as well informed as Mercedes-Benz was more than apprehensive to mess with success when it came to their timeless G-Series truck. “Timeless” is a nice way of saying that the flying brick style that harks back to a time shortly after dinosaurs roamed the Earth is still around today despite many obviously, and glaring issues. But, the G-Series has endured, and for one reason or another, it is a favorite of truck lovers with money all across the world. And for 2019, the Mercedes-Benz G550 comes to play with just enough old and new to make everyone happy.

The biggest issue at hand was the G’s block-like design. It looks like it belongs storming the beaches of Normandy in 1944, with all of its right angles and straight line sheetmetal. But this is also the G’s calling card, and defining trait, so Mercedes tweaked it just slightly enough to make it better, without raising suspicion. You’ll notice the once flat-as-a-wall windshield actually has a slight tint to it, to allow wind to go over the truck instead of slamming into it (bugs are sure to be rejoicing everywhere). The truck is also deceptively wider and longer than its predecessor. But while the door latches still retain their very mechanical operation, once you look inside the G, you’ll see a bit more of the difference.

Luxury abound is what hides inside that Stegosaurus-like outer shell. A digital dashboard displays all pertinent data, while the nav screen in the center of the dash keeps you on track, and oh yeah, there’s also an oh-$%&! bar in front of the passenger to keep it real. Differential switches sit in plain view to allow the driver to choose between several different modes that range from highway cruising to all-out rock wall climbing, while the glass moonroof overhead allows you to see exactly what weather is shining, or coming, down on you. And for a truck that looks like it drove here directly from WWII, the seats are far more comfortable, supportive, and dare we say, plush, than they have a right to be. And of course, they’re heated too — this is still a Mercedes after all.

Under the hood, the Mercedes-Benz G550 gets a very modern drivetrain. The motor is an exquisite 4.0-liter DOHC twin-turbo V8 that puts out a stout 416-horsepower and 450 lb-ft of torque. Backing up that motor is a 9-speed automatic transmission (sorry no more three-speed manual with a two foot shifter). That power gets routed to all four corners and helps all 5,551 pounds of the G hustle from 0-60 mph in just 5.4 seconds and on to a top speed of 130 mph. Let’s see your 1979 G460 match that! Of course the 13/17/15 city/highway/combined mpg is probably around the same as it has been for the last few decades.

The chassis has been stiffened up significantly to help the big box corner better, feel more stable at speed, and also be more comfortable. The front end gets upgraded to an independent set up (as opposed to the outgoing solid axle), but there is still that same of solid-axle in the rear to make it clear that the G is still very much a truck at heart. But the litany of safety features like blind spot monitoring, automatic emergency braking and lane-keeping assist all serve to mitigate some of that undue ‘truckiness’ .

While the 2019 Mercedes-Benz G550 has a base price of $125,000, it’s hard to argue that if you can afford it, it isn’t worth it. Despite the fact that a successful formula is almost impossible to improve, the G550 has seemingly tweaked its original recipe and actually made it better than before. Sure, there will always be some pushback from the absolute purists out there, but after one ride in a new G, you’ll feel better than you did trying that new Coke out back in the day. 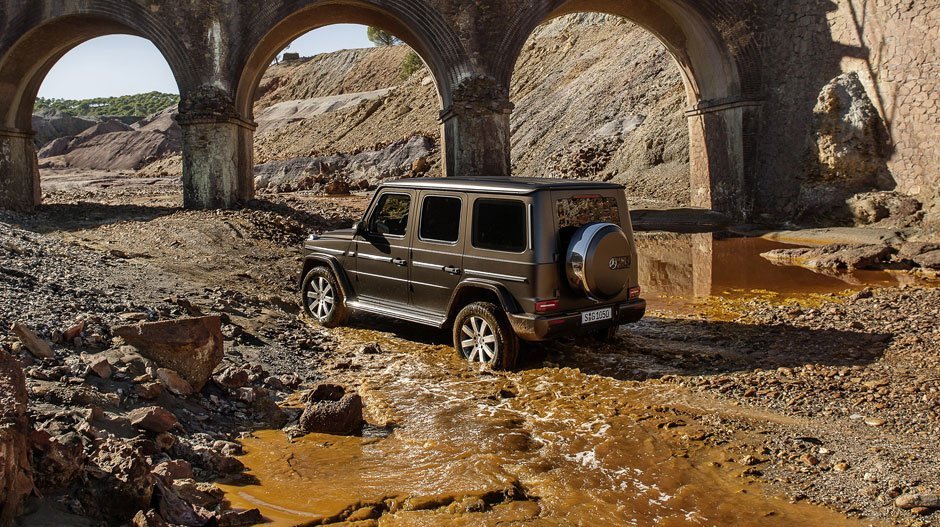