We are all fully aware of just how excessively hyper-competitive and cut throat the full-sized pickup truck market is, or at least we should be. Anyone that has sat through one quarter of football on a Sunday has undoubtedly seen somewhere in the neighborhood of six thousand pickup truck advertisements that go so far out of their way to undermine and discredit their competitors, it could qualify as a presidential race. Stat after stat, and asterisked number after asterisked number we hear over and over how somehow, Ford, Dodge and Chevy all have a class-leader in what appear to be the same categories. It’s an underhanded game of fine print that only serves to confuse and aggravate when it comes time to actually going to the dealership and purchasing one of these seemingly unbeatable machines. But for all the pageantry and fanfare associated with the full-sized market, sometimes we forget about the compact pickup truck that exists out there, and is steadily heating up and quickly becoming just as competitive as their bigger siblings. 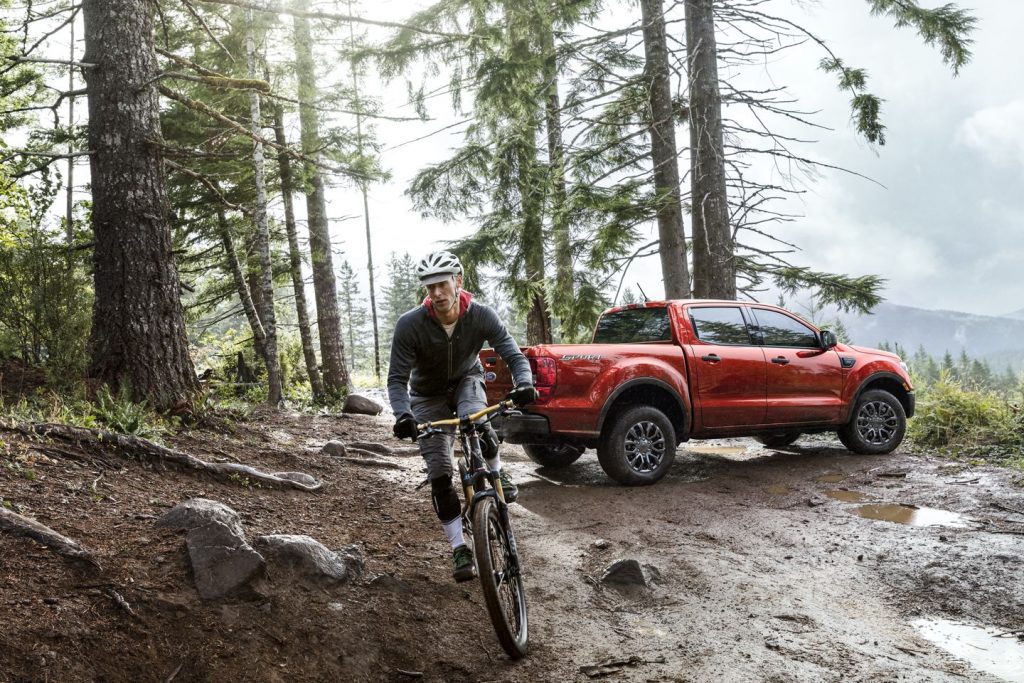 Ford is the latest to throw a familiar hat in the compact ring. The Ford Ranger will debut in 2019 as a brand new compact pickup, after being on hiatus since 2012. Shedding its former shell that had parts and underpinnings that dated back nearly two decades prior, the new Ranger promises to be more than just a mini F-150, and trucks like the Chevy Colorado, GMC Canyon, and even the Honda Ridgeline and venerable Toyota Tacoma should sit up and take notice.

At first glance, the Ranger does show actually pay homage to its F-Series big brothers with a similar headlamp setup, aggressive stance and wide open grill replete with the customary blue oval emblem dead center. With only a quick look, one might think they were looking at an F-150, but something will seem off after a few moments, and that is that this truck is 3/4 the size of the F. But again, the Ranger brings more to the table than just 75% of another Ford.

The biggest news is actually the absence of news. How so? Well, see in a world of cars and trucks, it seems as though there are options for just about everything imaginable, and the common-place thinking is that more options are better. But Ford has chosen to go very counterculture with the debut of the Ranger and has limited its engine and transmission choices to any you’d like, so long as what you’d like is a 2.3-liter EcoBoost turbocharged Inline-4 cylinder engine mated to Ford’s corporate 10R80 10-speed automatic transmission. That turbo four will probably sound somewhat familiar, because it is familiar — we’ve seen the same motor with some tweaks on the base Mustang. Don’t bother asking, no, no six-cylinder. No, no diesel. No manual transmission.

While a pickup with a four-banger may sound a little anemic, trust us, it isn’t. This diminutive dynamo puts down a ridiculous 270-horsepower and unreal 310 lb-ft of torque at a crazy low 3,000 rpm. Out of a four cylinder. That power output matches most of the V6 compact truck motors out there, and it does so while also smoking the competition in fuel economy thanks to those two less cylinders.

There will be a few different options available such as 4×2 vs. 4×4 drivetrain setup, as well as a base, SuperCab, and SuperCrew layout. Each of those options can all manage to tow a very impressive 7,500 pounds and haul a payload max of between 1,560-1,860 pounds, thanks in no small part to the full-boxed frame. The Ranger will also have a few big time options like Ford’s Terrain Management and Trail Control, both of which come with the FX4 package.

While numbers aren’t official yet, we can expect the Ranger to start right around the $25,000 mark and climb to the mid-30s depending on options. We can’t wait to see the newest Ranger show up, and with it, a bit more competition from the other truck makers out there, just maybe without the mudslinging.