When you first see the ZR2 nameplate attached to the Silverado 1500, it is impossible not to immediately think of the top-of-the-line Corvette ZR1. Those thought then lead to fantasies for the Chevy faithful of decimating arch rivals like the F-150 Raptor or Ram TRX. But, as oftentimes is the case, just because something reminds you of something else, doesn’t mean it is that something else. In this case, the correlation is almost inverse.

The ZR1 has always been the biggest, baddest and most brash Corvette on the block. hands down. It always has the most horsepower, most torque, and can usually outgun its lesser siblings by embarrassing margins. When it comes to the ZR2 of the Silverado variety, the excitement and power are much, much more subdued.

Let’s be clear, the Silverado ZR2 is no slouch by anyone’s standards. Power comes from a big 6.2-liter direct-injected, overhead valve V8 that makes a legitimate 420-horsepower at 5,600 rpm and 460 pound-feet of torque at 4,100 rpm. That power is then funneled through a slick-shifting 10-speed automatic transmission and on to all four wheels for maximum traction. Locking front and rear differentials work with a traditional transfer case that uses the ageless 2WD High, Auto, 4WD High and 4WD Low settings to keep things nice and easy.

The Silverado ZR2 is derived from Chevy’s off-road race truck, and as such, incorporates things like a factory-lift, uniquely-tuned springs that maximize front and rear suspension travel, skid plates to protect both the engine and transfer case and massive 33-inch BF Goodrich Wrangler Territory MT off-road tires. A high-approach steel front bumper allows for a Silverado-best 31-degree approach angle to attack even the most daunting of hills. There is also something called Terrain Mode, that for one-pedal rock crawling.

Although the ZR2 is derived from Chevy’s off-road racer, designers and engineers were smart enough to realize that not everyone that buys one of these extremely capable trucks is going to be engaged in a Baja race every weekend, and in fact, will more than likely be commuting to-and-from a cushy office five days a week. Thanks to new spool-valve dampers that are extremely responsive and controlled, the massive 5,789 pounds of truck feel half that over smooth pavement.

Inside, the ZR2 also offers a much more enjoyable experience than its hardcore cousin might suggest it should. The digital gauges in front of the driver sit on a 12.3-inch screen, while the integrated center infotainment hub is a 13.4-inch touchscreen, which is both Apple CarPlay and Android Auto compatible. There is also an optional heads-up display and rearview camera mirror, reminiscent of the Corvette’s same options.

While the Silverado ZR2 isn’t the fastest truck available today, it is not slow by any means. 0-60 mph takes just about 6 seconds flat, and through the quarter-mile in about 14 seconds. Of course, this truck is meant to race on just about anything that isn’t flat pavement, but undoubtedly, if a Raptor lines up at a traffic light, it’s go time.

Still being a truck, the ZR2 has a max payload capacity of 1,480 pounds, and a maximum towing capacity of 8,900 pounds with a conventional trailer hitch. Add to that Chevy’s trick Multi-Flex tailgate, which folds into a step, load-stop or work bench, and you have yourself a very practical truck underneath all that fun.

The Silverado ZR2 has a base MSRP of $70,100, which puts it on par with the more feral F-150 Raptor, and a full ten grand less than the more outrageous Ram TRX. Ironically, despite having a namesake that is so close to the ultimate extrovert Corvette, the ZR2 is actually something of a sleeper truck. It doesn’t turn heads right away, but does do everything on and off-road you could want, short of being a professional driver. So while it may execute its name differently than its overtly demonstrative ZR1 big brother, it seems that the ZR2 can still make the ZR-family around in its own way. 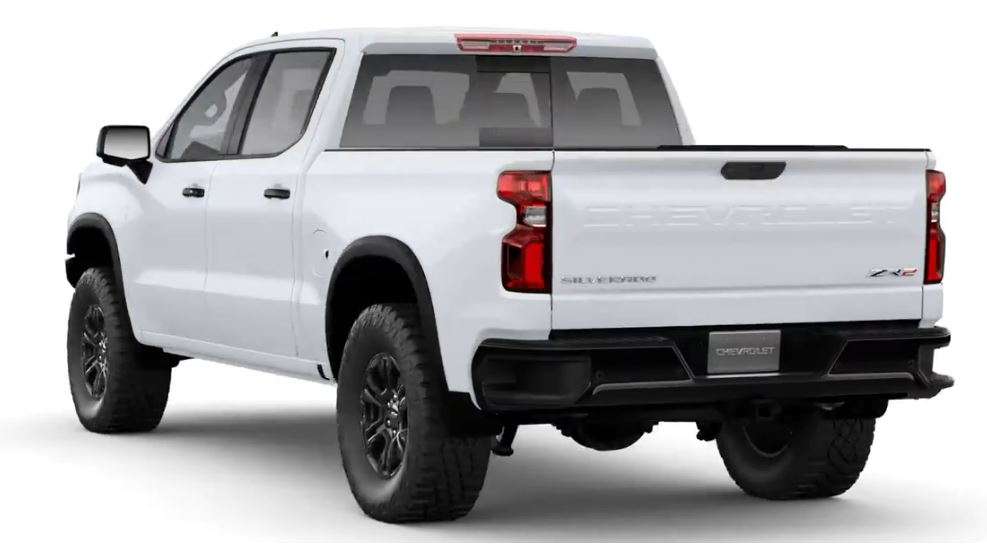