In the world of pickup trucks, it seems that the basic marketing ploy is the same paint-by-numbers ideology every time. Whether it’s Ford, Chevy, or Ram, most of the commercials go like this: Step one, have tough guy voice over that sounds like he’s smoked a billion Marlboro Reds. Step two, have some bizarrely specific statistics indicating how somehow your truck is the best in class at … whatever. Step three, have said truck towing something unbelievably unrealistic, like a freight train, airplane, Titanic replica, etc, to convey the sense that your truck is somehow able to defy basic laws of physics. Then before the commercial is over, mention in teeny-tiny small print that drivers shouldn’t actually attempt any of the nonsense they were just subjected to, while simultaneously displaying a monthly payment that will never, ever be conceivable except under one single solitary set of perfect circumstances. End scene. That was almost every pickup truck on the market … at least until the 2021 Honda Ridgeline came to play.

Since the second generation of the Honda  Ridgeline debuted in 2017, it became a bonafide truck instead of something of a pickup/SUV hybrid. But, despite its outward appearance as a real pickup, Honda’s goal is to fly its truck in the face of all things cliche. The 2021 Honda Ridgeline RTL is comfortable and easy to drive — the unibody construction, which is usually reserved for sedans, helps the RL shine on long road trips as well as day to day commutes.

Heated front seats are complimented by a cozy cockpit that sports an infotainment center highlighted by a 8.0-inch touchscreen. That system works in conjunction with Apple CarPlay, navigation, wireless phone charging as well as a pumping 540-watt sound system that even comes with a fun, if gimmicky, bed speaker setup that vibrates the bed to help produce sounds out back to spice up any tailgate fun.

While you’ll never see a new 2021 Honda Ridgeline RTL towing a 747 down the interstate, let’s be serious, you’re probably not going to ever have to try that stunt anyway. But, if it’s weekend trips to Home Depot, or the occasional off-road fishing trip, the Ridgeline is the truck for you. A towing capacity of 5,000 pounds and a payload capacity of 1,550 pounds is more than sufficient for most anything you’ll need to do.

While not the ridiculous 1,000 foot-pound torque monster turbo diesel engined galactic destroyer that some of its competitors claim to be, power for the Ridgeline comes to you in a tried and true Honda setup. The corporate 3.5-liter SOHC V6 is Honda’s all-purpose engine that you can find across the landscape of Honda and Acura showrooms, and there’s a good reason why — it works. Sure, 280-horsepower and 262 pound-feet of torque won’t blow your mind, it will get you where you need to be. That power is then routed through another company favorite — a 9-speed automatic transmission that sends that force to all four corners where Firestone Destination LE2 tires measuring 245/60R18 await.

Despite weighing in at a solid 4,500 pounds, the 2021 Honda Ridgeline utilizes that very efficient drivetrain to minimize losses and hustle from 0-60 mph in just 6.3 seconds, through the quarter mile in 14.7 seconds at 94 mph, on it’s way to a top speed of a governor limited 130 mph. Braking back down from 60-0 mph takes a mere 115 feet, and it can handle to the tune of 0.80 g around the skidpad. And while that engine might not be brag-worthy at your next BBQ, what is worth sharing is the fact that this midsize pickup can get fuel economy numbers of 18/24/21 city/highway/combined mpg.

Pricing for the 2021 Honda Ridgeline , which is a midlevel trim in the RL lineup, begins at $40,695. And despite not being able to perform outrageous stunts and marketed with obnoxiously over-testosteroned propaganda, the Ridgeline is a truck that bucks the trend in a good way. It is easy to live with and performs the way you want a truck to perform, and as an added bonus, never will embarrass you by hamming it up in another action-movie-turned-truck-commercial performance. 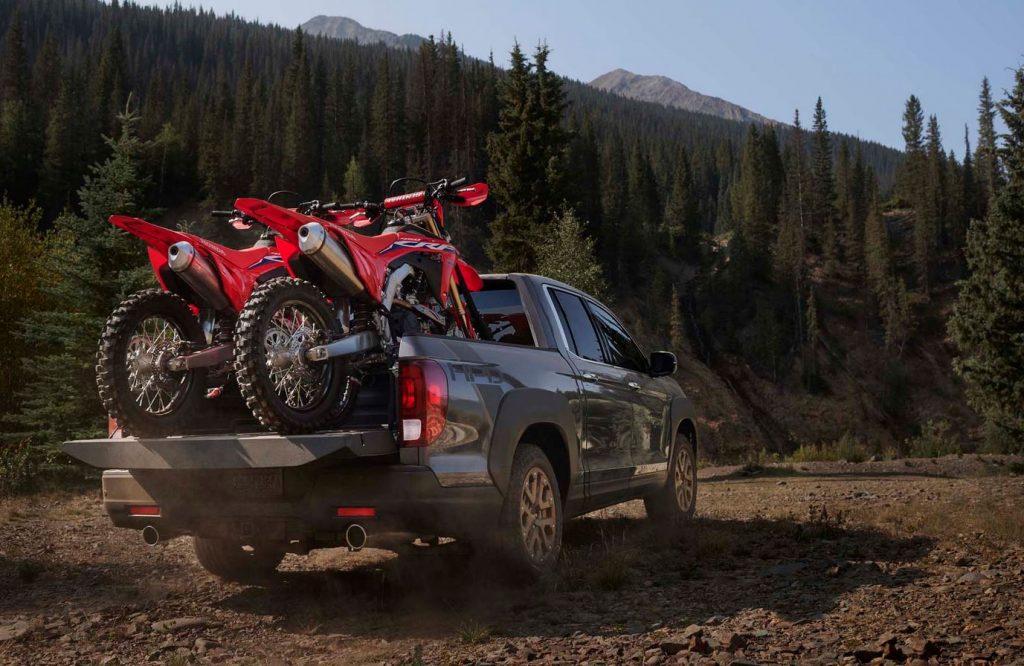