Ford SVT Lightning — There’s hauling, and then there’s haulin’. When Ford resurrected the Lightning nameplate for its supercharged super-truck in 1999, it proved that it could build a pickup that could do both. The Ford Lightning was a two-wheel drive Flareside pickup that was fitted with a 5.4-liter Eaton supercharged and intercooled Triton V8 that made a ridiculous 360-horsepower and massive 440 lb.-ft. of torque.

One look at the Ford SVT Lightning and anyone could see this truck was something a little different than your average F-150. Lower, wider, and more dramatically styled thanks to a sporty front facia and side skirts, replete with a passenger side-exit exhaust, the SVT truck made its presence known at every stop light.

With performance in mind, Ford tweaked more than just the engine in the ‘L’ however. Making a sports car out of something that is typically more at home at construction sites requires more than just bumping up the horsepower. Backing up that blown V8 was a modified version of the 4R100 4-speed automatic transmission that resided in more mundane versions of Ford’s pickups. An auxiliary transmission fluid cooler, heavy duty engine cooling system, heavy duty battery, and (you guessed it) heavy duty front and rear shocks all served to help beef up the Lightning to handle all of the power that the M112 roots supercharger made and help it ultimately get to the tires.

A limited slip differential was utilized (with good reason) and a 3.55:1 final drive ratio helped get the 4,670-pound moving with some authority. In 1999-2000, owners could only order their L in Bright Red, Black, Oxford White or Silver and could tow a maximum of 5,000 pounds and carry a payload of 800 pounds. Sure, those marks are somewhat paltry compared to your average pickup, but obviously, some compromises in off-road ability and utility needed to be made in order to have a successful street and strip performer — and let’s see a Tacoma lay down a patch of rubber 15 feet long coming off the line!

For those that waited around until 2001 to look into getting the keys to their Ford SVT Lightning benefited from a few upgrades. Thanks to a few minor tweaks, power in both forms got a boost — up to 380-horsepower @ 4,750 rpm and and even 450 lb.-ft. @ 3,250 rpm. The payload capacity was upped by 550 pounds to a maximum of 1,350 and the final drive ratio was dropped to 3.73:1 which made things just a little more fun on the get go. Ford also added True Blue as an optional color in 2002, and then changed it to Sonic Blue in 2003, as well as adding Dark Shadow Grey to the options list. Clear corner lenses and taillights are the easiest tell-tale sign of which model year you might happen to be racing (although they are also one of the first mods ‘99-00 model year owners acquire for their rides).

Box-stock, the SVT Lightning was exceptionally fast. 0-60 mph was clocked at a best of 5.1 seconds on its way to a quarter mile time of 13.6 seconds @ 102.0 mph. And even with the aerodynamics of a wooly mammoth, in 2003 the Lightning was crowned World’s Fastest Production Pickup by the Guinness Book of World Records after it posted a top speed of over 147 mph.

For anyone that has never driven, or at least ridden in an L, it would be worth your while to seek one out and convince the owner that they should let you experience the awesomeness that is an SVT Lightning. The hum of the startup will be your first clue that things are about to get interesting. After dropping the column shifter into Drive, make sure both hands are securely on the wheel and then blast off. The thrust that your body insists is acting upon it will almost seem unreal unless you happen to have been a conductor of a freight train or taken off in an F-16 at some point in your life. Although the supercharged Triton doesn’t spin like a naturally aspirated Ferrari motor, speed gathers at almost the same rate. Although any corners ahead might elicit a minor panic attack given the SVT’s
0.85 g handling capacity, as long as the path ahead is a straight line, it feels as if nothing on the planet could possess enough power to catch you until you decide to let them.

Unfortunately sales dipped in 2004, and production of the Lightning was discontinued by Ford after five years and a total of 28,124 models. There have been talks of another Lightning at Ford, but it seems that the SVT Raptor has taken the L badge in a different direction — one that is based a little more on off-road performance. With any luck, we will see another Lightning in the near future, 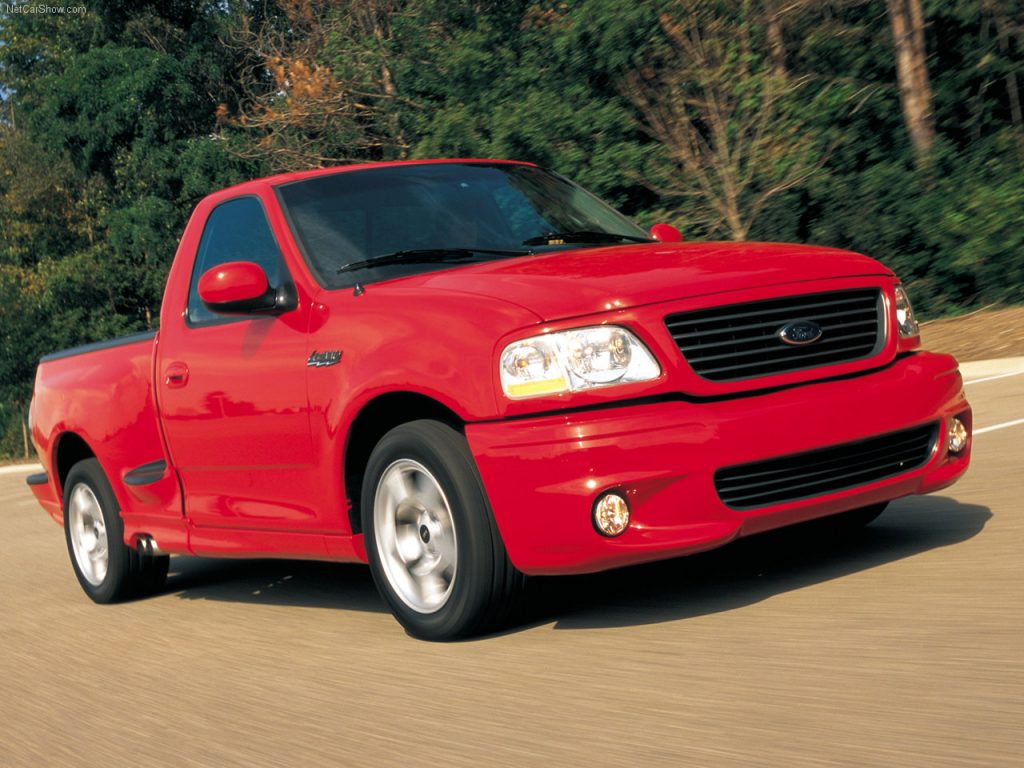 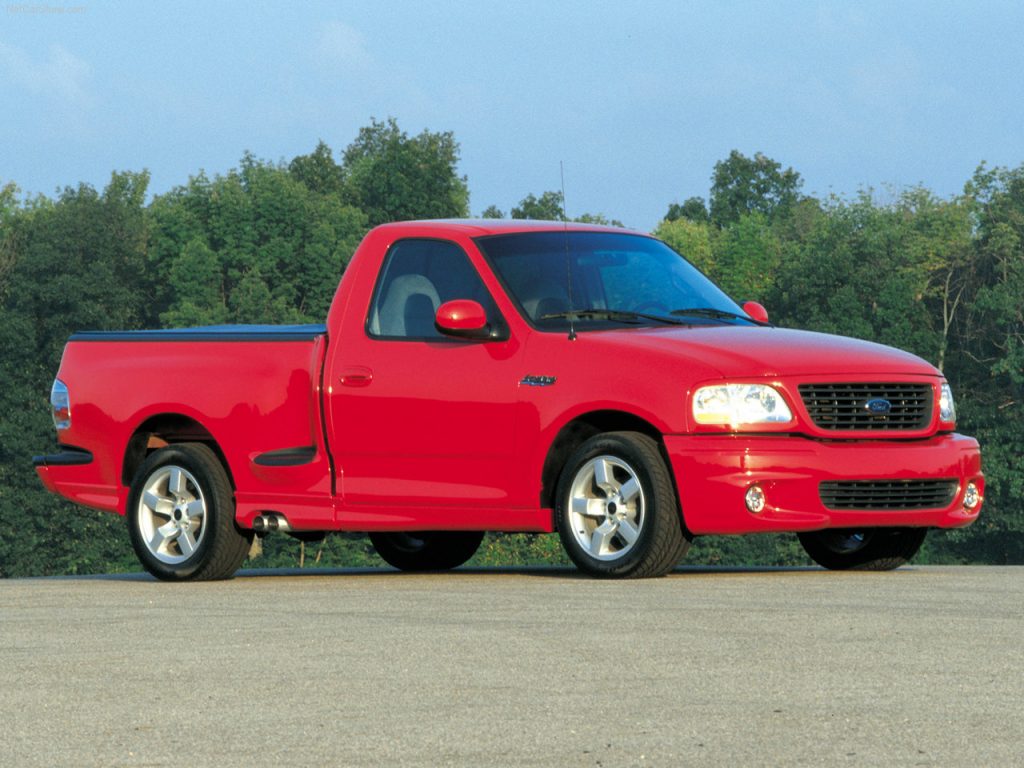 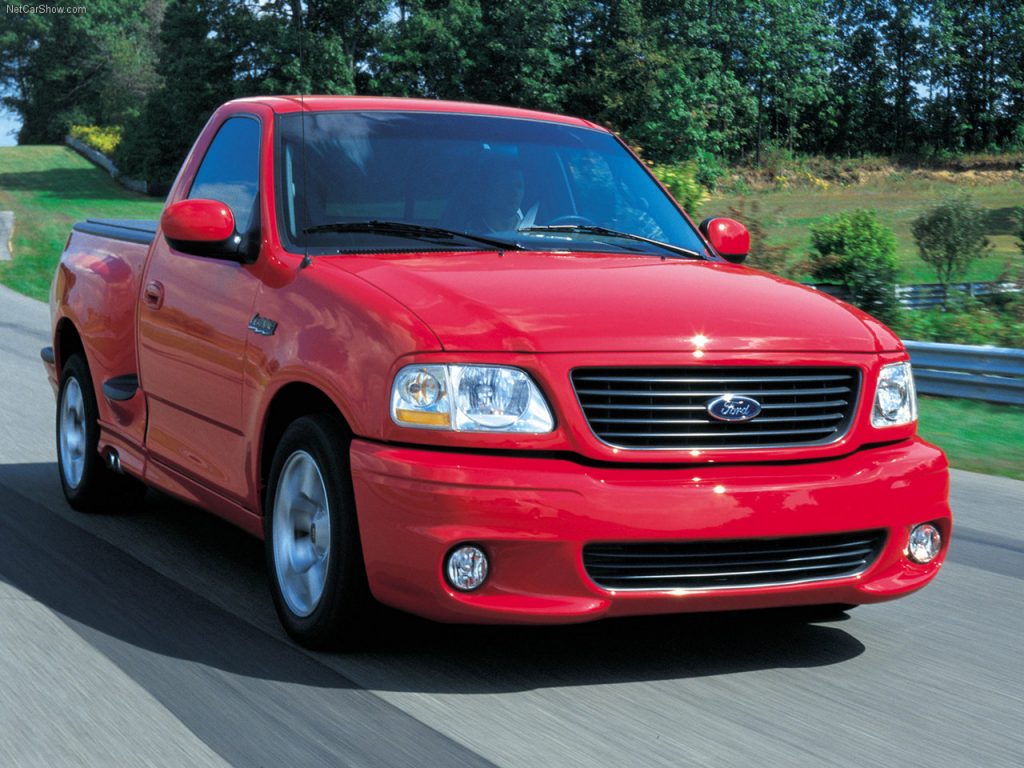