The RAM TRX — The more things change, the more they stay the same. This seemingly paradoxical notion can be seen in action from everything from sports, to diet trends, to real estate, and especially the auto industry. Please allow us to explain. You see, back in the late 1990’s and early 2000’s, there was a trend that started — something of a subdivision of the ever-expanding SUV-is-the-way-to-be pandemic sweeping the entire nation. Some proud Americans were not satisfied with just driving the largest road-going beasts on the planet, oh no, they also had to be driving the fastest set of wheels out on the interstate as well. And with this newfound strain of the sickness, the need for speed suddenly became part of our collective national DNA.

Small factions of the illness popped up earlier with then-peculiar trucks like the GMC Syclone and the Chevy 454 SS pickup truck. Even the Ford Lightning made its debut in the early 90’s. But late in the decade is when things really started heating up. The new Ford Lightning was a supercharged nightmare for most cars, never mind trucks, off the line. It’s 360-380 horsepower catapulted its 4,500 pound heft with the alacrity of an Olympic sprinter — oh and it could also tow 5,000 legit pounds too. Then Chevy jumped into the fray with the Silverado SS. It lacked the visual punch of its Ford rival, but thanks to a 345-horsepower 6.0-liter Vortex HO V8, all-wheel drive and a 4.10 final drive gear ratio, the SS lived up to its namesake, more or less, and at least gave the Lightning some run for its money, although it never truly caught up. Then in 2004, Dodge decided to drop the hammer down on this whole craze. The folks over at SRT shoehorned a Viper V10 into a Ram pickup truck and instantly redefined the word pickup. This 500-horsepower monster destroyed all, rocketing to 60 mph in 4.9 seconds. That was Corvette fast, out of a 5,000 pound truck. Game over.

And then all was quiet for a while, as the craze died down some and the insanity tempered some with the gas semi-crisis. But the Lightning lived on as the Ford Raptor, and a new breed of super truck was born. Toyota followed suit with its TRD Pro Series, and there is even some rumbling of a Yenko built Silverado out there. But this new breed aren’t just race cars on stilts, no these are fully capable Baja-worthy off-roading monsters, that have the suspension, power and performance to take on any terrain … quickly. Which leads us to the newest entrant into this new world: The Hellcat Ram TRX. Introduced earlier this year as the Ram TRX concept, this mighty machine sports a Mike Tyson-level aggressive front end that screams “Move or be moved!”, the huge fenders and steel bumpers make it clear this Ram … will ram. Oh, and let’s not forget what makes a Hellcat a Hellcat — that monstrous supercharged 6.2-liter Hemi V8 under the hood. Sure, the Ram TRX concept had 575-horsepower, but seen as how the Grand Cherokee Hellca … er, Trailhawk got the full 707 ponies, we see no reason Chrysler would skimp on that extra grunt for its favorite pickup truck.

Out back there is a link coil rear suspension that is taken straight from the racing development team, and there will also be five terrain modes to choose from with the optional 4×4 Performance Control System. Inside, the Ram TRX or Hellcat, are six-point racing harnesses that will hold you, and your passengers in the suede covered seats, even if you happen to be jumping a sand dune at the time. There is a certain homage you can hear in the exhaust note of the Hellcat, as it pays its respects to its Viper-infused predecessor. It is a snarl unlike anything this side of an F-Type SVR or Corvette ZO6, and as intimidating and unusual as it might be to hear, there is also a note of familiarity too. It seems that for as much as the car and truck world has changed, the more it stays just the same, and thankfully so. 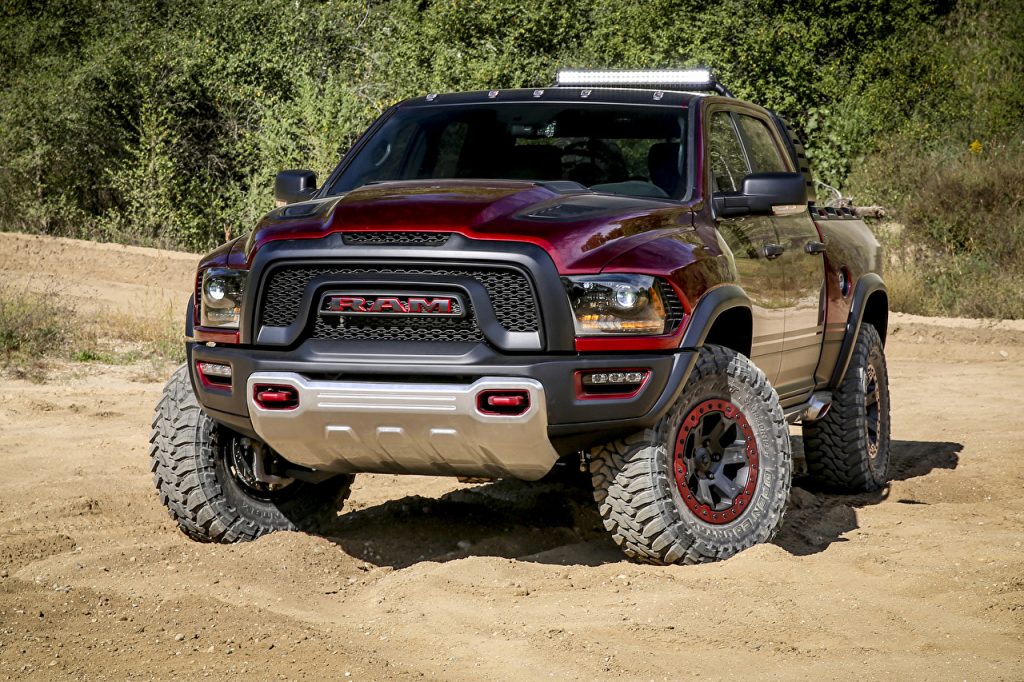 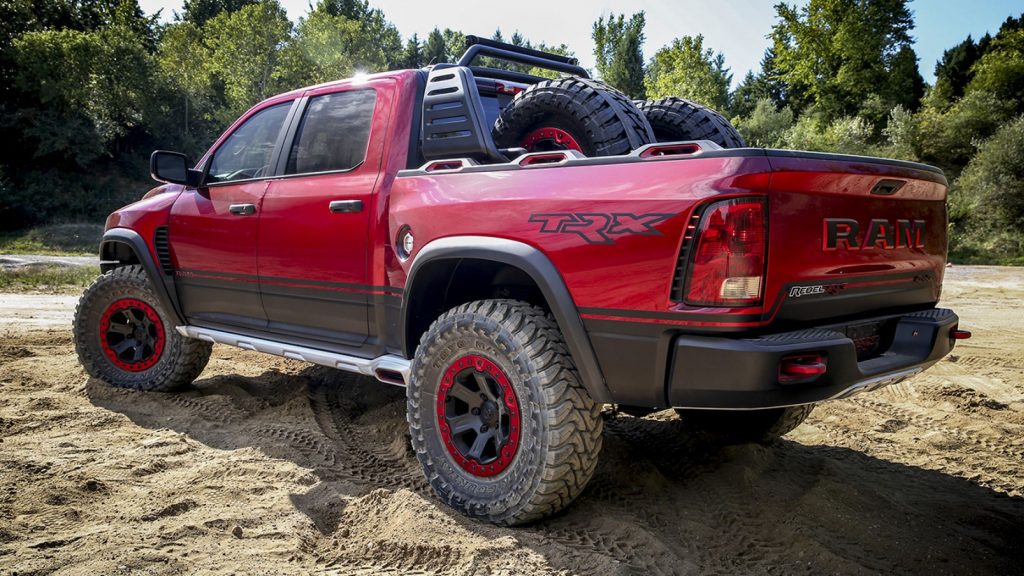