In a lot of ways the saying, “If it ain’t broke, don’t fix it” resonates across life, and ends up being invariably true, at least until it’s not. Everyone was comfortable with the movie theater setup, until somewhere along the way recently, it became better with the advent of reclining seats and food served to your seats. Video rentals were all the rage, and everyone was on board with Blockbuster Video, and even then, the early days of the mail-order Netflix until suddenly digital on-demand showed up, and no has looked back since except maybe Blockbuster shareholders. Yet, the latest 2023 Toyota 4Runner continues on as it has for more than a decade, and is still pretty good.

2023 marks the 40th anniversary of the 4Runner, and with it comes, not surprisingly the 40th Anniversary Edition. The foundation of Toyota’s SUV stretches all the way back to the 2004 Tacoma, and although by now, most SUVs have transitioned to car-based platforms, the 4Runner has stood fast with its truck-based roots.

Power comes from the same 4.0-liter port-injected DOHC V6, which has been the same engine in one version or another since before social media was a thing. That engine is capable of making 270-horsepower and 278 pound-feet of torque, which is then funneled through a respectable five-speed automatic transmission and then on to all four wheels.

Inside, the 2023 Toyota 4Runner feels like it has pretty much since its inception. An 8.0-inch infotainment touchscreen sits front and center, while a litany of actual buttons and rotary knobs stand clear in the way of what some might consider “progress”. But buttons and knobs are much easier to operate without having to take your eyes off the road, so maybe there is something to sticking with what works after all. There is an eight-speaker sound system along with fun features like automatic headlights and windshield wipers.

While many might turn their nose up at a truck-based SUV, the 4Runner does show off with some of its truck-like qualities. There is a low-range four-wheel drive gear, which is geared low enough to get into, or out of, just about any sort of sticky off-roading situation. Towing capacity is an impressive 5,000 pounds, while payload capacity checks in at a peak of 1,700 pounds.

The base price of the 2023 Toyota 4Runner with the Anniversary Package is a somewhat lofty $47,705. But, then Toyota is only going to make 4,040 (get it?) of these before they’re gone. So while many will flock to the newest, cushiest wannabe-SUV, those that opt for the 4Runner are likely to be those that are fine sneaking their own food into the movies, and more than likely still own a DVD player with hundreds of movies in their closet because after all, if it ain’t broke… 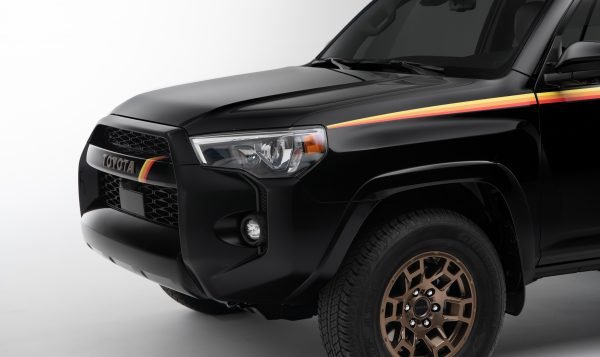