2021 Dodge Durango Hellcat — It wasn’t that long ago that the idea of a hot-rodded pickup truck or SUV was a little kooky.  “Hauling” was only supposed to refer to lumber, concrete blocks or furniture.  But, even when it was looked on as weird, we saw the Chevy Silverado 454SS, then the Ford F-150 Lightning.  After that was the stupid-fast GMC Syclone and Typhoon that could obliterate a Ferrari 348 with ease.  Then, late to the party, but wanting to make up for lost time, Dodge chimed in with the Viper-powered Ram SRT-10 that hammered out a ridiculous 510-horsepower and more or less giving Dodge the gold medal for that entire generation of heavy haulers.

Fast forward about two decades, and my how things have changed.  Most every car company on Earth has at least one SUV in production, and most of them have a hot rod version of those SUVs.  BMW, Mercedes, Ford, and Audi all have designated trims that are made for “haulin’”  not just hauling.  And once again we see Dodge showing up a little late to the party, but bringing plenty of punch to go around in the form of the Durango Hellcat.

We’ll get right to the fun — the Durango Hellcat is powered by the familiar 6.2-liter supercharged overhead valve V8 and produces a stupefying 710-horsepower and mind-numbing 640 lb-ft of torque.  That crazy power is then routed through a TorqueFlite 8HP95 eight-speed automatic on its way to all four wheels thanks to the help of a single-speed Magna MP3010 all-wheel drive transfer case.  If you haven’t found a Youtube video of the exhaust on this machine, you really should.

But the Hellcat wasn’t just made to go fast.  Thanks to manhole cover-sized 15.7-inch rotors and Brembo six-piston calipers up front, while 13.8-inch rotors get squeezed by four-piston calipers out back.  That clamping force is enough to slow the 5,700 pound Hellcat down from 60-0 mph in just 114 feet.   The suspension of the Hellcat is also ready to perform thanks to three-position Bilstein adaptive dampers, while the rear damper mounts get tightened up by 18 percent, which allows the Durango Hellcat to whip around the skidpad to the tune of 0.89g.

Dodge does acknowledge that not all the roads the Hellcat sits on will be racetracks, and with that in mind, there are several drive modes that can be chosen — the standard automatic mode splits power 40:60 front/rear, but switch it to Snow or Towing and that ratio changes to a flat 50:50, Sport mode splits power 35:65 and Track mode gives you 30:70 so no matter what environment you’re in, the Hellcat has you covered.

But just in case you do find yourself on the racetrack, your chances of winning are pretty good with this monster.  The Hellcat will rocket from 0-60 mph in an organ-flattening 3.5 seconds, from 0-100 mph in just 8.8 seconds, through the quarter mile in 12.0 seconds flat at 115 mph, and just for kicks it can go from 0-150 mph in 24.4 seconds.  Try that in your Toyota RAV4.  The Durango Hellcat can damn near max out its 200 mph speedo, with a top speed of 180 mph that is only limited by drag, definitely not by power.  All that power comes at a bit of a cost though, as the big supercharged motor slurps up fuel like a basketball player shooting a Gatorade commercial.  With a fuel economy rating of 11/17/13 city/highway/combined MPG, the Dodge isn’t going to win many green awards, but it will win some trophies at the track.

Speaking of cost, the Durango Hellcat chimes in with a base price of $82,490 and while that money might seem steep, considering that its European rivals come in at tens of thousands higher for the same or even lesser performance, suddenly the Hellcat looks like a pretty screaming deal.  So while it may have been seen as a strange thing, once again we see Dodge coming in a little late, but bringing with it 710 reasons why it is once again the life of the party. 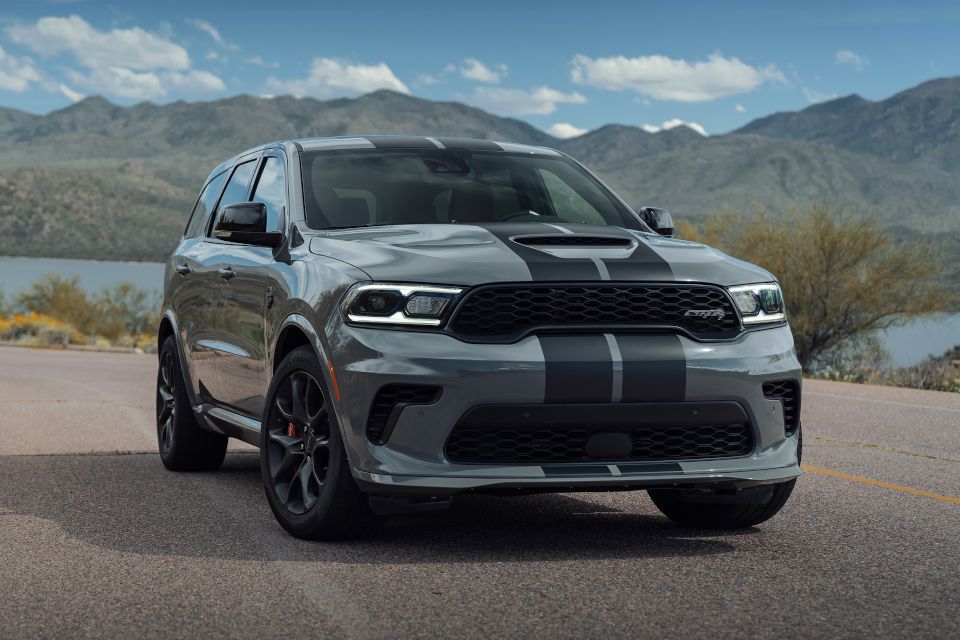