2019 Lincoln Navigator — In the Millennial world of ‘experiences over possessions’ we’ve seen all kinds of new lifestyle choices. There is minimalist way of life, where people are choosing to buy as little as possible, own as little as possible, and spend as little as possible in order to essentially couch-surf their way through early adulthood. Then there is the tiny house movement, that essentially takes the minimalist couch surfing ideology and changes it up so that you can take your couch with you on the back of a trailer and leap frog from town to town like a serial killer running from the cops. Hybrid cars are everywhere, and people are turning the use of plastic straws into crisis level event across the nation.

But with all that being said, and as much as the subcompact/hybrid/electric car market has exploded over the last decade, there is still a sizable (pun intended) portion of the population that just wants to be big, brash, and bold. They have money and want to flaunt it a little bit, and have enough friends, family, and or pets that they want a big truck to move everyone around in, but in a comfortable, maybe even plush, maybe even extravagant way. And the 2019 Lincoln Navigator Black Label is the truck to do just that.

The Navigator has been around for the better part of two decades, and has always been a status symbol. Even when big SUVs were all the rage, the two highest profile trucks on the market were the Cadillac Escalade and the Lincoln Navigator, and the 2019 version carries on that same feeling. Yes, it is still a body-on-frame 17-foot, 6,000 pound SUV, but Lincoln polished its lines and made it somewhat reserved in appearance compared to its rivals.

Inside is where the Navigator really separates itself. The Perfect Position seats are quite possibly the most comfortable seats in any vehicle ever made. They are 30-way adjustable and offer heat, ventilation, and massage. Even the second row gets captain’s chairs and they own temperature and audio controls. And even the oft-forgotten third row still manages to get plenty of legroom and even reclining seats. There are half a dozen color schemes to choose from, and they are all visually striking. There is plenty of cargo space – 19 cubic feet behind the third row, 57 cubic feet with the last row folded down, and with both rear rows down, you’ll get a cavernous 103 cubic feet of space.

A 10-inch infotainment touchscreen is at the helm powered by Ford’s Sync 3 programming and comes with embedded navigation, Apple CarPlay, Android Auto and even works with Amazon’s Alexa. There is also a Wi-Fi hotspot that can power 10 devices, as well as six USB ports and wireless charging to keep everyone connected.

Power comes from a 3.5-liter turbocharged DOHC V6 that makes a serious 450-horsepower and 510 lb-ft of torque. That power is routed through a ten-speed automatic transmission and on to all four wheels to help the big Nav run from 0-60 mph in an impressive 6.0 seconds flat. Of course, driving like that won’t help you get the most for your money at the pump, where the Navigator actually turns in a better than expected 16/21 city/highway mpg. Don’t worry, the Lincoln is still a truck and proves it by being able to tow a sizable 8,700 pounds if needed.

The Navigator also sports plenty of safety features like lane-keeping assist, adaptive cruise control, automatic emergency braking, back-up assist, trailer monitoring, and the most useful of the bunch — blind spot monitoring, as a truck this big can make even an Air Force fighter pilot feeling like Ray Charles during rush hour.

The Lincoln Navigator has always been on the high end of the price range for SUVs, and that is by design. It has marketed itself as the prize you get when you win at life, and its an extra large prize for sure. Starting at just under $95,000, it it clearly a very expensive automobile. But, in the world of minimalism, maybe we don’t have to just think of the Navigator as a exaggeration of possession excess but instead, think of it as the ultimate possession of experience on wheels (minus the bathroom). It’s hard to argue with a a house that costs less than 100k and gets 19 mpg. Even a Millennial can’t be offended by that. 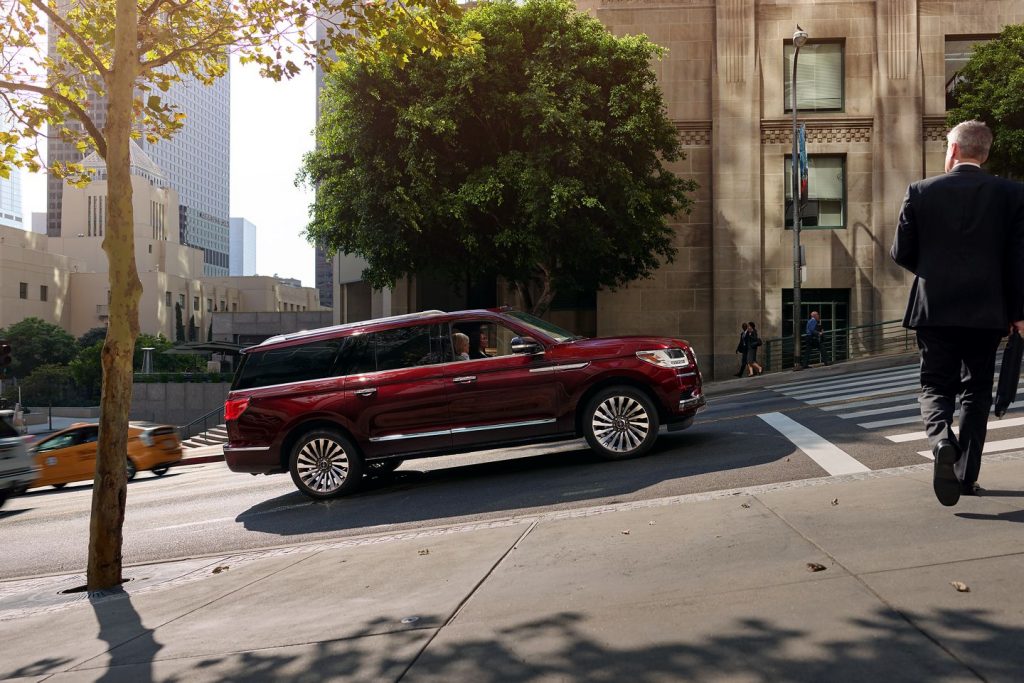