2003-2008 Infiniti FX — When shopping for an affordable luxury SUV, you’re likely to hear phrases like “heart/soul of a sports car”, or “racing heritage’. But that’s usually marketing-speak for hard springs, big wheels, and a body kit. The 2003–2008 Infiniti FX, on the other hand, actually does have the chassis of a sportscar (the Nissan 350Z), and it drives just as good as it looks. So let’s have a look at the S50 Infiniti FX.

When the 2003-2008 Infiniti FX was introduced in 2002, the burgeoning LuxUV segment suddenly had a new standard to meet. Beneath its (now popular) coupe-like bodywork was the FM chassis from the Nissan 350Z. This meant 4-wheel independent suspension, less body roll, and handling that was more akin to a sports sedan than a top-heavy SUV. The engines were also tuned to provide a more visceral driving experience, which gave the FX a significant advantage over its mostly truck-based competitors.

Buyers of a first-generation Infiniti FX can choose from the 280-hp Infiniti FX35 or the 315-hp Infiniti FX45. The FX35 gets the same VQ-series 3.5-liter V6 as the Nissan 350Z, and the FX45 shares its 4-cam V8 with the Infiniti Q45/M45. Car and Driver clocked the 0-60 time in the FX35 at 7.1 seconds. The V8-powered FX45 did the deed in 6.3 seconds, which made it the fastest production SUV in 2003. That’s not very fast by today’s standard, but it’ll be more than adequate for your daily commute. Plus, the exhaust note and chassis have been tuned to make it a very satisfying drive.

On the luxury front, the 2003-2008 Infiniti FX can be found with all sorts of goodies, like power everything, rear/all-wheel drive, a gauge cluster that moves with the steering wheel, and, of course, navigation (DVD-based). Post-2005 models got a standard backup camera, side curtain airbags, and Lane Departure Warning (the FX was the first vehicle to offer this feature in North America). Plus, the rear seatbacks even recline, which makes the content in this used Infiniti competitive with features offered in many brand new LuxUVs.

If you can get past the firm, sport sedan-like ride (avoid the optional 20-inch wheels if comfort is important to you), then the 2003-2008 Infiniti FX will provide you with tons of style, luxury, and performance. Both the 2003–2008 Infiniti FX35 and 2003–2008 Infiniti FX45 can be had for $5,000–$11,000, depending on mileage, equipment, and condition. And considering that a late model Infiniti QX70 looks quite similar to the first-gen FX it makes it a great used car for the budget impaired  while looking like a baller. 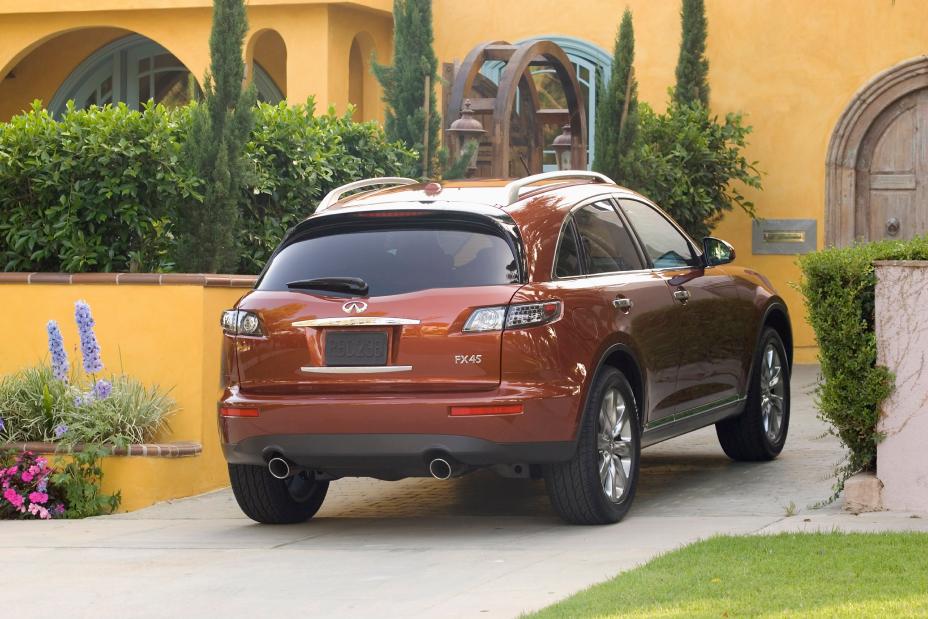